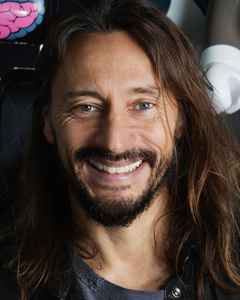 Grammy Award-nominated French record producer, house music DJ & remixer, and owner of the label Yellow Productions. The second name of this stage name, is pronounced "Sinclair" (like British computer/engineering brand named after Sir Clive Sinclair), and is often misspelt like this on releases and in publications.
Noted French house svengali, head honcho of ultra-hip independent label Yellow Productions, and responsible of The Mighty Bop project. Chris lives in Le Marais, the gay quarter of Paris, the city in which he learnt to play his trade as a funk, rap and French hip-hop DJ in 1986, when he was 18.

Chris 'Le French Kiss' got the name Bob Sinclar from a French spy movie ("Le Magnifique" directed by Philippe de Broca) and first adopted, to a certain extent, the attitude portrayed by the character in the film. In 1998, the release of Sinclar's first album "Paradise" sparked a storm of controversy. Thomas Bangalter's song "Gym Tonic", which was included on the album without Bangalter's consent, caused legal issues when it used an illegal sample of Jane Fonda.
However, in 2000, Sinclar's second opus "Champs Élysées" confirmed his success with hits such as "I Feel For You" and "Darlin' ".
Other releases from that period includes his collaboration with Disco artist Cerrone for a compilation of remixes, and the popular Africanism series, which was more deep house oriented.
Dropping the original concept of "Bob Sinclar" after that, the release of "III" (2003) and of "Western Dream" (2006) established him as a popular/commercial DJ. His remixing skills are notable, as he worked for artists such as Ian Pooley, Jamiroquai, Dimitri From Paris, Moby, Fused, and Madonna.
Related collaborators: Bob Sinclar's Philarmonic Orchestra, The BS's Angels.
Sites:
bobsinclar.com, Facebook, instagram.com, instagram.com, Twitter, Wikipedia, YouTube
Alias:
Bob From Paris, Chris The French Kiss, Christophe Le Friant, Desmond K, Ingrid De Lambre, Mister B (4)
Variantes :
Tout Voir | Bob Sinclar
2-1 to 2-16, B. S., B. Sinclair, B. Sinclar, B.S., B.Sinclar, Bo.Sinc, Bob, Bob Cinclar, Bob S., Bob Saint Care, Bob Siclar, Bob Sincair, Bob SinclaIr, Bob Sinclair, Bob Sinclair's Angels, Bob Sinclar feat. Gary Pine, Bob Synclair, Bon Sinclair, Mr. Bob S., Sinclair, Sinclar, ボブ・サンクラー

Bob Sinclar is the prime example of a once amazing artist going to crap. His music under this alias from 1996-2003 was frankly some of the best music I've ever heard period. He first started putting out music under the Bob Sinclar name in 96, with a 12' called "A Space Funk Project". It was a good start for him. His remixing skills were also notable, creating excellent remixes of tracks by Dimitri From Paris, Ian Pooley, Superfunk, etc. In 1998, he released his first album "Paradise". Which has really grown on me ever since I first listened to it. Each track on it ranges from good to amazing and each track has it's own unique sound. However the track "Gym Tonic" was completely stolen from Thomas Bangalter (most well known as one half of Daft Punk). This would come back to bite him in the ass later on.

On a side note, I never liked how he would put naked women on the covers of his music. It just comes off as tacky and unnecessary. Though thankfully he stopped doing that by the time the Paradise-era came to a close. His next album "Champs Elysées" is a pretty good album even though some of the tracks fall a little bit short compared to the other's. I will do a separate review of Champs Elysées another time. Shortly after the release of Champs Elysées, Bob Sinclar left the French House circle and has made commercial music since. In my opinion, the only good song he made after Champs Elysées is "World, Hold On". Final verdict, check out his older stuff if you wanna listen to some high quality house music.

6 septembre 2007
Christophe's Paradise album was 100% good one. Disco at it's best without any bad track. Then after years, he came up with a song (I was listening that 'Love Generation' everyday on Melbourne radios 15 times a day) and I wasn't even imagine it was by Christophe. Than the shock came and yes it was the new single by Bob Sinclar! But the bomb came after that. The worst of the worst was that newly single, Freedom. Well is there any explanation not to use at least a different name?! Anyway, Paradise is still a timeless album but excitement of hearing the name Bob Sinclar is over by the house & techno scene.

Bob Sinclar: arguably the worst "artist" of this era: his producing is downright feeble and despicable, ranging from stealing complete tracks to raping C&C music factory's "Gonna Make You Sweat". Inane vocals in abundance, loops to give you twitching headaches, cheese-feeding until your head explodes like rotten fruit. Really, every man with a minimum of intelligence will agree with me: music for the music-haters amongst us!

The DJ/Producer/Remixer commonly known as Bob Sinclar clearly polarises opinion. Judging by previous comments I think it's fair to say he's loved and loathed in equal measure, which is as it should be IMO...more on that later.
His early career saw him in the vanguard of the French filtered house phenomenon which in it's infancy reinvigorated the entire house music scene. His first album was something of a classic, "Ghetto" and "Visions of Paradise" being memorable efforts, however the misguided "Gym & Tonic" and the shenanigans surrounding it was to prove a portent of problems looming on the horizon. The "French Touch" became, if we're being honest, very formulaic and something of a parody after 3 years of sweeping filters and disco samples. After an interesting dabble with what I would describe as electro in the shape of "III" Sinclar returned from the wilderness with a number of radio friendly records in the vain of Dario G; "Love Generation" being a huge hit. I hated it on first listen, and after a thousand more I doubt it'll grow on me, it did however lead to some quality remixes.
For some reason his more recent effort "World Hold On" found more favour with me, infact after hearing it in Ibiza a few times last summer during special moments I've grown to love it and it's perhaps his finest hour to date. Is it cheesy? Yes, very, but then most house music probably is, at least it's honest about what it does, the sentiment is no different to most records who hide beneath a veneer of minimal indifference (detached Germanic Microhouse an obvious example).
I was staggered he released "Rock This Party" as I can find no redeeming features within the record. Remixes aside it has all the subtlety of the Bay City Rollers...moreover, whoever advised him to appear in the video needs to be taken outside, blindfolded, lined-up against a wall and shot.
I can't help escape the thought that Sinclar has perhaps forsaken an artistic legacy of the faceless master producer a la to pursue avenues in the more popular side of dance music. However, even amongst the most celebrated of his peers the likes of Daft Punk have sailed close to the wind but succesfully navigated the treacherous seas between pop and dancefloor (Discovery in it's entirerity oscillated between the sublime to the ridiculous) for want of a better word. But who am I to criticise?

In my point of view, Bob Sinclar had a big potential in the first years of his career. When he began, he was in the close circle of the best French DJ's. His first album revealed many good tracks, such as "My Only Love", "The Ghetto", "Visions Of Paradise" and "Disco 2000 Selector". His remixing skills were notable (Ian Pooley, Superfunk, Dimitri From Paris, Stardust amongst others). But the "Gym Tonic" event seem to have been crucial. It pushed him away from that circle. However, for a short period of time, he continued to elaborate on his original concept of "Bob Sinclar". "Champs Élysées" also contained a few good tracks such as "I Feel For You", "Ich Rocke" and "Save Our Soul". Many other remixes proved potent: Fused, Serge Gainsbourg, Jamiroquai, Moby. "III" was mostly left away. The melting pot of Tango, Electro Pop and House didn't followed the same logic. After the release of a remodeled "Greatest Hits" album, Bob Sinclar deliberately embraced the commercial side of Dance Music with "Western Dream", and releases such as "Love Generation" which were added to daytime radio airplay in North America. The childish aspect of the music and of the videos clearly shows that the original concept of Bob Sinclar was finally left away. No more "man of mystery", no more samples. It's now something totally different from what it was back ten years ago. Bob Sinclar is now mainstream, believe it or not. Which makes his music a lot less interesting to my ears. I still enjoy some of his previous works like some people enjoy "Africanism".

Clearly Bob Sinclair productions head very much towards "old superfunk disco days of the 80's" with a slight touch of today house. He tries to get the best out of his compositions being somehow unique by using live musicians and not samplers and co.
Although when he works on the studio he tries to involve in his works as many well-known people as he can (Cerrone Cutee'B etc) has he suceeded as a composer? IMO nooo!!!
Has he suceeded as a producer? IMO yeees! Africanism series are just perfect.
Are his sets good? Pretty perfect. I like him as a DJ the way he builds up his set but anyway the materials he has on his crates are not my taste. His DJ side is over-influenced by the "Bob Sinclair disease" making him the ideal DJ for excecutives or BCBG/Poshy type of people.
+1 for the idea that he should stick with his label management. He has nothing to offer to the local scene with cheesy-crappy-love-generation-alike-releases.

For me this guy is a crook. Here's the story that has been related in french sprecialized press few years ago : Formally known as Dj Chris the French Kiss, he asked to some other "french touch" guys to make tracks for the concept "Bob Sinclar". After the success of one of these tracks, Bangalter's "Gym Tonic" (not a collaboration, 100% of Bangalter) and the clearing problems for Jane Fonda's voice, Chris just steal the track (Bangalter didn't want to release it as a single) and decided to become THE Bob Sinclar. So Chris became famous stealing a Bangalter's record... For information, Bob Sinclar, or more precisely Bob Saint-Clair, is the name of a parodic secret agent played by Jean-Paul Belmondo in the french movie "Le Magnifique"