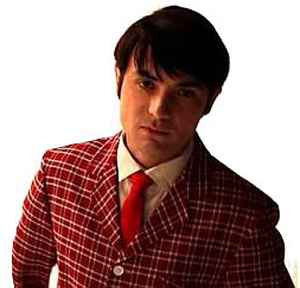 Vrai nom:
Stéphane-Franck Pascal
Profil:
MeeK (birth name Stéphane-Franck Pascal; born 16 February 1971 in Montmorency, near Paris, France), is a Franco-British singer-songwriter, recording artist, musician and music producer. His stage name (always spelled with a capital "M" and a capital "K") is a homage to 1960s British pop producer Joe Meek. A multi-instrumentalist, MeeK plays all the instruments on his recordings through a multitracked/multi-layered method of recording and provides all vocals including multi-layered backing harmonies.

Since his first album in 2002 and an ever strong presence on the Internet right from its very early days as a mass media, MeeK is part of the European pop/rock Indie music scene. Over the years and through word-of-mouth some have come to consider him a "cult-artist" because of his ever dedicated worldwide fanbase, his rather non-typical and enigmatic persona and the fact that he is one of the very first few artists in Europe who have pioneered in utilizing the Internet as a marketing tool and a medium to publicize and/or expose their music to the general public in the late-1990s, long before the advent of social networks like MySpace, Facebook or YouTube.
From Wikipedia https://en.wikipedia.org/wiki/MeeK
Sites:
meekintheweb.net, Facebook, Twitter, SoundCloud, YouTube, wikidata.org, Wikipedia