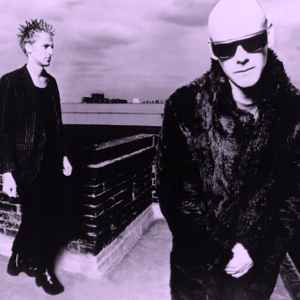 The Future Sound Of London

Profil:
British duo who met in the 1980s in Manchester. Their very influential discography shows off influences spanning acid house, hardcore techno, ambient, krautrock, '60s psychedelica, and more. Previously Dougans, as Humanoid, had a UK Top 10 hit with Stakker Humanoid. Together as FSOL, they scored a major crossover success with Papua New Guinea. Their first full-length Accelerator charted their dancefloor-friendly early career, after which FSOL moved into deeper, more album-oriented world. Lifeforms was a double-disc set spanning long stretches of breakbeat-flavored ambience. It was followed by Dead Cities which added hip-hop, trip-hop, industrial textures, and bleak urban imagery into their mix of influences. Their ISDN album compiled music from their ISDN-uplinked radio broadcasts from the mid-1990s. After Dead Cities came out in 1996, they felt like they were moving in the wrong direction and they dropped off the radar after the A Monstrous Psychedelic Bubble Exploding In Your Mind Vol.1 mix in mid 1997.

After a 4 year long hiatus in which they were surrounded by rumors of insanity and drug addiction (whereas the real situation was mercury poisoning from teeth fillings and some soul-searching travels), the Papua New Guinea Translations concept remix album came out in 2001, followed by the full-length The Isness and more material under the Amorphous Androgynous name.

are they really humans? in my opinion, they are aliens from another planet.

1 octobre 2021
These two brilliant men helped push music forward, into the new millennium: their work has always been surprising, indefinable and exciting. One of the clever things about FSOL is their name, with which they make the irrefutable claim that they have always been the future sound of London. It's prediction, fulfilment and statement all in one.
Répondre Me notifier 5 Helpful

10 décembre 2018
one of the most insightful bands i've ever heard. they take you on a musical journey unlike any other...
Répondre Me notifier 9 Helpful

A league of their own. First heard Lifeforms and ISDN back in 95 and was totally transfixed. Powerful ambient soundscapes, tripped out hip hop and experimental breaks occasionally with the inspiration of psychedelic rock. These guys stand out above the rest and dont get caught up in the trends. Probably what MGMT was looking to connect with as well as many others but still slightly missed the mark. They do what they do. My classic music from the 90's and beyond

Gods amongst men. so far ahead for their time. masters of mindbending audiovisual delights.

4 avril 2017
It always intrigued me who they decided to remix or probably more realistically remix offers they accepted. Prefab Sprout, Nomad, Stereo Mc's, Shamen, Curve, Jon Anderson, Robert Miles etc surely artists & labels with closer audiences to FSOL wanted them to do remix work. Why were there no Reload remixes? or Black Dog remixes? or remixes for Rising High artists? did they deliberately steer away from remixing obvious choices? were they slightly ostracised from the cool crew? was it completely based around money? I mean they remixed Bryan Ferry what is that all about, from absolutely everyones perspective it makes little sense. Does everyone know what was going on with the choices of remixes that FSOL engaged in?
Répondre  Voir les 3 réponses Me notifier 4 Helpful

19 août 2016
I love the soundscape albums FSOL have done and are still producing. The Environments CDs allow me to close my eyes and take a dreamlike journey to places I couldn't have imagined before. The Archive series is loaded with weird and wonderful tracks which again fire my imagination.

I appreciate there are those who enjoyed the dance genre material, but what they do now (I am no fan of dance tbh) is a vital part of my listening pleasure.
Répondre Me notifier 5 Helpful

FSOL, once a great and respected duo in electronic music sadly now seem to be milking there fans with there continuing Volume and Environmental album series. The Vol and Environmental albums have so-far never really lived-up, equalled, or bettered FSOL previous and much better albums: Accelerator, Lifeforms, ISDN, Dead Cities, Papua New Guinea Translations; and there excellent pseudo 'Amorphous Androgynous' debut. Unfortunately! It now seems that with every Volume release, FSOL simply release a very predictable formula & direction with its music. Each release, so-far (1-7), tracks sadly feel more like leftovers, uncompleted out-takes, or unfinished ideas taken from Lifeforms/Dead-Cities which now seem to be shoved and pasted together with to many tracks added without any real quality control taking place! Every (1-7) new Volume compilation -outtake- album does sound far too familiar to the one before it, yet bland and pale to the original beauties as Lifeforms & Dead Cities. This unfortunately, though to a lesser extent, is the same with the more ambient Environmental album series too and a lack of ideas with nothing really new or captivating in the music, both Volume & Environmental series suffer with this!. Even FSOL pseudo 'Amorphous Androginous' with there excellent acclaimed debut album, and considered classic, with its excellent fusion of techno, ambient, Idm, and dub have now unfortunately gone down the wrong road with its now psychedelic-electronic-rock direction with each new album release losing more appeal, esp. when compared to the excellent debut. I wouldn't mind the albums if they stuck to the formula they help pioneer and invent across ambient-Idm-techno, but having a compilation of outtakes without much change or development, while also delivering the same kind of theme album after album really start to feel sloppy and lazy! I'm sure they could have made wonderful fewer albums simply using the best of what was available rather throw every single leftover that seems to spread across an ever growing series, esp Volume. It now sadly seems that the once the great forward thinking electronic duo have now just become a shadow of themselves. Music has now become a pale comparison !!

3 janvier 2008
The partnership of the two FSOL'ers has been nothing short of the meeting of two futuristic sound geniuses. Papua New Guinea, despite having found influences from Meatbeat Manifesto's - Radio Babylon, is without any shadow of a doubt the best dance record ever. The drug extacy was invented for this record and everyone should own a copy. Nowadays they are releasing from the back catalogue the kind of records which defined ambient and took many of todays electronic artists into a new era of melodies and atmospheric soundscapes. You will find their other incantaton of Amorphous Androginous more on the psychodelic rock vibe these days as one half got mercury poisoning from his fillings and almost died, following this event he relaunched his contribution to the pairs sound being more influenced by the sound of live instruments you would expect an lsd user from the 70's to be playing and the other half stayed with the electronic sound of previous releases, an interesting combination. Stick with their 90's sound and you won't go wrong.
Répondre  Voir 1 réponse Me notifier 6 Helpful