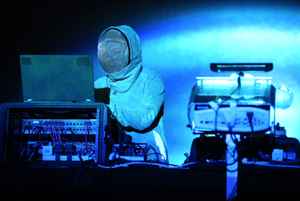 The performing pseudonym of Tom Jenkinson, an English electronic music artist signed to Warp Records. He specialises in the electronic music genres of drum 'n' bass and acid with a significant jazz influence.

16 juillet 2020
Of late, I have found Andy J's music much more consistently engaging and fun than his brother's. This comes from someone who owns most of SP's back catalogue, has seen him live, and considers himself a fan. Tom's first three albums are--to this day--amazing (and need to be re-released). His remix of himself (Squarepusher remixing Chaos A.D.) may be his finest moment and a high-water mark of IDM/drill'n'bass/whatever.
Voir les 3 réponses

3 août 2019
There's talented artists. There's really talented artists. And there's this guy. A part of the big 3 revolution in the 90's (Autechre, Aphex Twin), Tom is a major factor in the altered perception of where music can take us. Unapologetically nuanced, his outrageous gift for music is rare as hell. Literally blew minds earlier in his career, seemingly content to blow minds and polarize sporadically in the digital age, more likely driven by unwieldy propensity to do what he does, Jenkinon is a giant in the modern music vernacular.

http://www.factmag.com/2016/01/15/squarepusher-warp-deluxe-reissues/
Looks like Squarepusher is going to be reissuing his backcatalogue albums over the course of 2016, in deluxe editions.
edit: it has been almost 4 years since this was "announced" by publications with zero sources asides hearsay. no results, make of this what you will

14 mai 2015
There's a higher awareness & complete freedom of thought & expression that comes through from a few artists lurking since the 90's, artists such as Richard D james, Luke Vibert, Geskom collective e.t.c, and- Tom Jenkinson. The difference between good and excellent is a huge difference- and these guys are that difference. A true original.

20 février 2015
New Squarepusher album titled "Damogen Furies" has been announced, and it's been scheduled for a release on April 21st. A single for the album, "Rayc Fire 2", is also available for streaming through Spotify and can be downloaded through the offical Squarepusher site.

WOW! I love this stuff! This is music at a new level. I love the way he takes styles like jungle, jazz and 2step/garage and makes them into something so much different. I really like "Do You Know Squarepusher", it sends shivers all over me every time! Papalon is another amazing track. I thought I'd heard jazz but this is something else! There are so many other great tracks like Chin Hippy, Come on my Selector, Port Rhombus, Boneville Occident, ALL AMAZING! If you haven't yet experienced the marvel that is Squarepusher.....DO IT NOW! This is something else....

All enigma's aside, the musical artist that is Squarepusher is actually a guy from Chelmsford, England, named Tom Jenkinson. In the last 7 or 8 years, Jenkinson has made an enormous impact on electronic music. If you look up Squarepusher in the dictionary you will find a definition that says 'someone who likes the ladies' .... an apt description perhaps for one of electronic musics weirdest exponents.

Squarepusher is a very prolific artist ... one minute he's managing to squeeze Miles Davis-influenced jazz into drum-n-bass tracks, the next he's playing with reverb for hours, abandoning melody in favor of trippy, dubby fusion. Squarepushers first few releases were on Spymania and Rephlex. He was subsequently courted by R&S, Ninja Tune and Warp before signing on the dotted line with Warp.

Squarepusher began his career with Warp with a single entitled 'Vic Acid' single which was closely followed by the album 'Hard Normal Daddy'. Opening with 'Cooper's World' the album showed that machines could swing and that Tom could confidently take further musical risks with his arrangements. 'Chin Hippy' on the other hand threw the listener in at the deep end as an object example of technological experimentalism. Harsh, cerebral, unique. Nevertheless 'Hard Normal Daddy' wound up in end of year charts in magazines throughout the world moving 75,000 copies in the
process. Incidentally all payments made by Warp were returned by Tom's accountant as they were out of date by the time he got around to paying them in!
"Nothing is allowed time to settle and no idea outstays its welcome... it takes at least four or five listens to absorb even the basic structures of the record" was NME's comment on the follow-up 'Big Loada' release. By the time it was apparent that Squarepusher had very much mastered his art so complex, wry, and exhilarating was the mini-album. Tom describes
the musical process as "...pulling the music out of nowhere, not thinking what you are doing." "You have ideas, you get in the studio, the ideas disappear and things start to flow," he explains, "the songs then exist in space somewhere between you and the machinery. When you come out you have a souvenir of your time in this psychic space, a space where
you are intuiting everything and not even worrying about things like chords and notes."

All seven tracks occupy this other worldly space. Drum'n'bass taken to abstraction, hovering just the right side of collapse. Harnessing the raw energy rush of the original raves but, pushing structure to the absolute limits of comprehension tracks like 'Full Rise' and 'Come On My Selector' (the latter recently given twisted visual accompaniment by Chris Cunningham) are benchmark moments of modern electronic music to be appreciated as both strange and beautiful abstract compositions and incendiary dancefloor tracks for the more open minded. "The rushiest, fastest breakbeat music you could still relate to...

That still had some relation funk, but remained right at the edge where it could become a meaningless piece of twat shit music" commented Tom on the mini-album in typically succinct manner. Right at the edge is exactly the place.

Tired of London Tom moved up to Sheffield early in 1998 to mix his newly finished Music Is Rotted One Note' album. If 'Big Loada' represents Tom at the peak of his programming powers then 'Music...' is perversely both the antithesis and the next logical step. The restlessness nature of both artist and music, and his need to step ahead of the ever-growing
legion of copyists around, had led Tom to take genuine risks with this album.

All the instruments are played live, the drums forming the foundations upon which Tom has laid down all the bass and keyboard parts. There is no sequencing on this release. Dropping his trademark infinitesimal production skills in favour of these more relaxed and entirely live structures 'Music Is Rotted One Note' is, as a consequence, Squarepusher's purest musical experience to date. On his own admission the closest thing to his heart he's yet produced and yet another indication of Tom's amazing musical vision. Funky, precise, loose, yet unmistakably Squarepusher 'Music Is Rotted One Note' is born of Tom's need to stimulate, challenge, and rally against any idea we might hold that music is disposable.

In other words music to make you realise quite why music can be the most important, beautiful thing in life. Squarepusher has since gone on to release the albums 'Budakhan Mindphone' and the awesome newie 'Go Plastic' both of which have continued to challenge the industry formula ...

Squarepusher - nicely, son! Yeah, 'Vic Acid' delivers on the beeps, 'Big Loada' does it on the breaks and some of the later releases are a jazz fan's nightmares on wax!

It's got to be said, Tom Jenkinson never fails to deliver on some count - just when you think you know what to expect from the boy he throws the rulebook away and releases things you never thought you'd buy. Then you moan & complain at the lack of a break, put it aside and play again two weeks later and get the point. Genius!

I have everything except a promo mix of 'Mr.Kirk's Nightmare' I have heard about (yep, even the rare as rocking horse shit 'couple of hundred copies in exsistence' early singles) and will post details here very shortly.