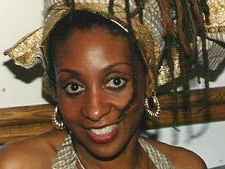 Vrai nom:
Sandra Smith
Profil:
Born Sandra Smith in Los Angeles, Izsadore was a young, afro-sporting dancer and Black Panther when she was introduced to Fela Ransome Kuti at a gig at LA's Ambassador Hotel in 1969.

Izsadore would become Fela's lover, friend and teacher, giving him a copy of The Autobiography of Malcolm X and opening his eyes to Black consciousness. Their relationship had its stormy side too, and it was this that inspired Fela when he sat at the piano in Sandra's parents' house, composed the song "My Lady's Frustration" and invented afrobeat.
Izsadore sang lead vocals on the Africa 70 classic "Upside Down" and is still involved in music, often working with LA's Afrobeat Down. Holler at herspace.
Variantes :
Tout Voir | Sandra Akanke Isidore
Sandra, Sandra Danielle, Sandra Isidore, Sandra Izsadore