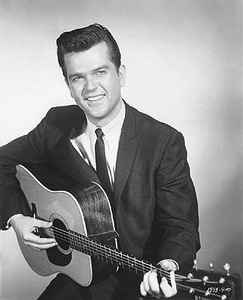 Originally a '50s rock & roll singer, Conway Twitty became the reigning country superstar of the '70s and '80s, racking up a record 40 number one hits over the course of two decades. With his deep, resonant down-home voice, Twitty was one of the smoothest balladeers to work in Nashville during the country-pop era, but he was also one of the most adventurous. More than any other singer, he was responsible for selling country as an "adult" music, slipping sexually suggestive lyrics into his lush productions, yet never singing misogynist lyrics; by and large, his songs were sensitive and sensual, which is part of the reason why he achieved such a large success. Once Twitty reached the top of the country charts in the late '60s, he stayed there for years on end, releasing a consistent stream of Top Ten hits that both defined and expanded the limitations of country-pop by adding subtle R&B, pop, and rock & roll influences. Though he had some pop success, Twitty remained country to the core; occasionally, his song titles were simply too corny, which was why he retained his popularity until his death in 1993, aged 59. Son Michael Twitty, daughter Joni Twitty, daughter Kathy Twitty.