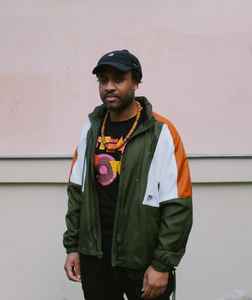 Vrai nom:
Fred N'Thepe
Profil:
Composer, producer and instrumentalist, Neue Grafik has been building a strong rep for himself over the past few years, releasing records on labels such as Rhythm Section, 22a, CoOp Presents and Wolf Music. His sound is a hybrid of jazz, house and hip hop, all with his unique geographical flavors of African ethnicity, Parisian roots and a love for London sounds like broken beat & grime thrown into the mix.

Having been first properly introduced to the community of Total Refreshment Centre, home to London's flourishing jazz scene, during an after-hours jam, it came to TRC founder Lex Blondin’s attention that Neue Grafik had some exquisite compositions of his own. A few weeks later, it was decided that Neue Grafik would form a band — Neue Grafik Ensemble (him on piano, rhodes and synths, Emma-Jean Thackray on trumpet, Vels Trio's Dougal Taylor on drums and Matt Gedrych from MaddAddam on bass) — and that they would do their first gig at the now-closed venue of TRC, a week after the first day of rehearsals. No pressure… Then, the group got in the studio.