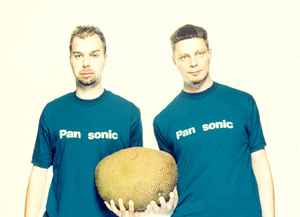 In 1994, they began releasing on Sähkö Recordings, the experimental techno label of their friend Tommi Grönlund. On their first tour outside of Finland, while in London, they got a record deal with Blast First (the Mute sub-label). In 1995, their first release on Blast First was "Vakio" which received international recognition. In 1996, Sami Salo left Pan Sonic and the project continued as a duo until disbanding in 2009. The pair briefly reformed in 2015 to create the soundtrack for the documentary film Atomin Paluu ("Return of the Atom").

21 juin 2021
Pan Sonic : Amazing Strange Sharp Noisy Loud and more than you can think .i'm not the biggest fan just love it and my neigbours find me a madman that i listen to this.So wat ?

Confusing and thrilling and everything you never wanted to know about white noise but were afraid to ask. Pan(a)sonic is 'everything but' in many ways - at first subversively taking down world's leading electronic corporation, before the latter's forces took them down back. Music? What is music in Pan(a)sonic's case of impressive A's and B's? Whether on record or playing live, they prove making noise is a difficult job - it is not entertaining but it is one of the purest sound essence instalments you can truly feel as your body twitches to its high or low volumes. Beware - music which escapes the loudspeaker, invisible sound force that might damage your insides... or maybe stimulate them. Think of all the orgasms you might have experienced while listening to Pan(a)sonic and never really noticed. Too bad. Nice experience. Check it out next time. Concentrate. The art of noise in its truest sense.

17 septembre 2003
Other memorable Pan sonic prank was, of course, the group's original name nicked from the famous electronics manufacturer, which must have caused many frustrations to their record label. As Toshiba, the Panasonic Electronics' biggest competitor in Japan had plans to licence the group's music from Blast First, the change of name seemed to become more probable all the time. The latest news tell that after having been contacted by the lawyers of Panasonic USA, who threatened the act and their record label with legal actions, from spring 1998 onwards the duo is officially to be called Pan Sonic. Thus were also crushed Ilpo's hopes that the band would have been sponsored by their electronics giant namesake...

2 août 2003
Good to note, these guys <i>will</i> stress your speakers if you try to play them too loud, and don't judge the volume by the first bits you hear. They love to play around with the psychoacoustic effect of placing really loud noises next to really soft noises to increase the perceptual volume. They also do a lot of stuff that sounds as if it goes above and beyond the frequency rating of most speakers (and human hearing capabilities.) Some have debated that even though you cannot hear them, if you speakers can reproduce them, these sub and super sounds effect the impact of the sounds you can hear.

Due to how clean and powerful the sounds are, I have found that Pan Sonic tracks make excellent referencing CDs when testing out new audio equipment in a store. There is very little background hiss at all, if any, and the great range of frequency and volume really gives you a solid feel for what the testing equipment can do.

Technical advisories and notes aside, these guys do some great experimental stuff. I usually save listening to their CDs for those times when I can shut off the lights, lean back in a chair, and enter alien worlds of sound with no disturbances. Haunting and powerful stuff.