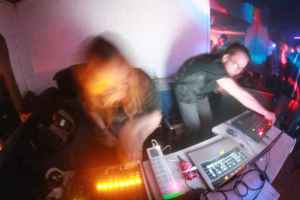 Profil:
Hardcoholics was originally a hardcore duo ceated in '98 in Marseille consisting of two artists: DJ Loky (Wilfrid Wouters) and Kyo_o (Jean-Marc Melet). In 2002 they have been joined by Ingrid Losfeld AKA Leeloo.

DJ Loky comes from the hip-hop scene where he started playing in '95 with a local band and quickly became fond of electronic music and computers.

Kyo_o is a Manga, computers and video-games fan, that's why he naturally came to Hardcore : His sound as Dj and composer is violent and futurist , whether in Hardcore or Techno.

In '97 , they started making music together, and in '98 they released their first vinyl on BEAST rec. Lots of other records followed on labels like Deathchant, Psychik Genocide or Epileptik and they appeared in parties like EUPHORIA (Marseille), WOODSTOCK (Avignon), SPECIES (Manchester).