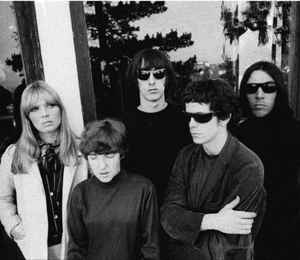 Profil:
Rock 'n' roll group from New York. Known for Andy Warhol's artwork, often cited as one of the more important and influential groups of their era.

Inducted into Rock And Roll Hall of Fame in 1996 (Performer)

6 mars 2022
How weird that if you like (or don't) some music you have to convince others that your opinion is the correct one. Does that show insecurity, in case you are in a majority of one? Doesn't matter it's all subjective. I've bought albums, sold them coz I didn't gel with them, heard them later & re-bought them, go figure. Of course you are right, whatever your opinion, so just enjoy or don't listen to it. This all takes me back to when I first heard the VU & Nico, around the tender age of 20 at my new way-out girlfriend's flat, (she had about 20 piecrcings, shaved sides of her head, a glorious mullet), there were autumn leaves covering the floor of her bedroom and she wore form fitting bias cut vintage dresses from the 1950s & 60s, and this album played regularly on her flat stereo (which was a bunch of circuits hand wired across the floor). Venus in Furs bought otherworldly exotic depravity closer to my my straight suburban life (in my parents home) as I reveled in this new-found Bohemia of sex and other substances, for this reason the Velvet Underground holds a special place in my heart, (at the time I thought the Beatles were soft & mainstream & I was more into Led Zep). Now some 25 years plus later I have expanded my tastes, but still love VU (and the Beatles) plus things I have discovered recently like Miles Davis' electric period crazy Mingus, Gong, Stereolab/Broadcast/Vanishing Twin.....but still the thrill of hearing VU & Nico is still there, and the only other album that gives me a similar feeling is Black Rebel Motorcycle Club's first album.

15 janvier 2022
MMmm, the beatles debate thingy, yea im no fan and think they got lucky with a lot of help from the top, they got the best of the best thrown at them, ok some stuff is OK, some is actually very good but a lot is crap, the revolver album in my view is the best work they did, I don't like Sgt Pepper, white album is middle of the road at best, they sang about what they did and was near to them they say,

listening to the VU today and thinking this was recorded back in 1966 when the Beatles were singing absolute crap, the Lennon & McCartney thing means nothing at all. it's empty and boring,
something I've noticed like most bands they change the lyrics of songs to suit the time and place, dropping "hey white boy what you doing" when playing live versions of waiting for the man then adding it again at different venues, it's missing at Max's . . . trying not to stereotype black people as narcotic salesmen selling junk to white kids perhaps. . just a thought I had . . . it ain't important in the bigger picture.
P.S. what is endless and is in front of you and the more you get of it the less you have . . . TIME . . . don't waste it . . .

17 août 2021
If you like early VU you'll definitely dig this https://www.discogs.com/The-Sweet-Things-Teen-Guitars/release/1886245

30 mars 2021
Whenever there's a converasation, debate, argue (anything) on sth like "three consecutive or not rock n' roll albums" that are the most important ones, you just say say the first three VU LP's and that ends everything, period//

21 mars 2019
Well, of course you're absolutely right. The Beatles were just a pub band that got lucky.

Arguably the most important band of all time! I once gave a lecture on how the Velvets were more important than the Beatles - the latter created the pop music phenomenon, but the Velvets changed the paradigm of music forever mixing classical ability (Cale) with lack of traditional music ability of Reed. This set the stage for all forms of non-traditional based music from punk to industrial to electronic music in general.