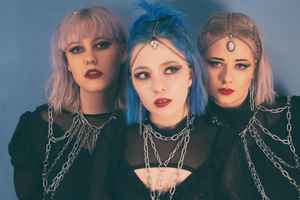 Profil:
Kælan Mikla is a three-piece punk/no-wave band from Reykjavík slowly getting darker and deeper with new waves and more instruments. The band consists of three girls who perform their own poetry and have been described as an avant-garde, fresh breeze into the Icelandic music scene in the past two years. The band was formed after winning first place in a poetry slam held by the city library in January 2013. They have since then played multiple festivals as well as just finishing a small europe tour. Kælan Mikla are known for their dark melancholic sound, most of the songs consisting only of heavy bass, drums and screams with some softer, melodic synth parts in-between. The bands lyrics focus on inner confusion and their intimidating stage performance, often including performance art of some sort, is bound to leave the crowd in a melancholic trance.
Sites:
Facebook, Bandcamp, SoundCloud
Membres:
Laufey Soffía, Margrét Rósa, Sólveig Matthildur

Literally "no words" case scenario. Probably the most amazing indie band i've stumbled upon this decade. Absolute master class of a multilayered poetry, elegant mixing of different music styles at once and progressive growth of the band's sound. Plus with a touch on an icelandic culture attached to all of it. Be warned, you will be quite on a binge with their latest releases. It's not if the early one is somehow bad, but this trio is so gifted that their evolution steps can stretch for a whole mile as it seen in the latest "Undir Köldum Norðurljósum". It's such a classy blend of genres - in particular ethereal with folk, gothic rock, post-punk and synth-based electronics - that it marks the point where it's a genre of it's own. Pure alternative perfection and definitely the best album i've heard this year all around. Not even Zanias alongside with Lingua Ignota can match with this in 2021.