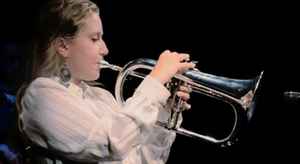 Between New York City and Montreal, French-Canadian trumpeter, composer and producer Rachel Therrien boasts an enviable CV. She is considered one of the most promising jazz musicians, playing a wide variety of musical styles and rhythms.

Winner of the 2015 TD Grand Prize Jazz Award at the renowned Montreal International Jazz Festival, the 2016 Stingray Jazz Rising Star Award and nominated as Best Jazz Producer at the IMA’s 2018 Award, she has shared stages with many world-class musicians in clubs, festivals and on television throughout the Americas and the Caribbean.

Rachel Therrien released her 5th album recorded in Paris with her new European Quartet in March 2020 during the coronavirus breakdown. The new album VENA was released under French Label Bonsaï Music in the spring of 2020. She also presently tours with her Montreal Quintet which will celebrate their 10th anniversary in 2020; with her New York based Latin Jazz Quartet and very occasionally, she performs Pensamiento : Proyecto Colombia, 2016.

Rachel holds a bachelor degree in jazz performance from the University of Montreal, a degree in arts management and a music certificate from Instituto Supérior de Arte (Havana, Cuba), and was selected to participate in the Banff Center Jazz and Creative Music workshop held by Dave Douglas and Vijay Iyer in 2012. She has worked with a large number of mentors and teachers such as Ron DiLauro, Elpidio Chappotin, Laurie Frink, John McNeil, Jonathan Finlayson, Clarence Penn, Ralph Alessi and many more.
As well as being recognized as an artist that can’t be ignored, Rachel is also a key player on the Montreal Jazz scene, helping it to grow and expand its frontiers by being an example for emerging musicians and actively working for the jazz community. In 2013, she founded the Montreal Jazz Composers Series, bringing more than 200 musician-composers from Canada and the US to showcase their original music and play together for the first time in front of crowd of mainly young non-musicians during Montreal Int’l Jazz Festival. She believes that “Jazz is a philosophy of conversation between musicians from different backgrounds through improvisation, and that we, as musicians, it is our mission to keep jazz alive and to make sure that our generation of non-musicians live the experience and appreciate that unspoken language.”
Sites:
racheltherrien.com, Bandcamp, music.apple.com, Wikipedia, Wikipedia, Twitter, Facebook, instagram.com, YouTube, open.spotify.com, allmusic.com, SoundCloud, musicbrainz.org, wikidata.org, songkick.com, Last.fm, bandsintown.com
Membres:
Alain Bourgeois, Benjamin Deschamps (2), Charles Trudel, Simon Pagé
Dans les groupes:
Afro-Latin Jazz Orchestra, Flor de Toloache, Rachel Therrien Quintet, The DIVA Jazz Orchestra