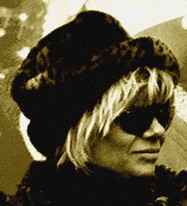 Profil:
Although she studied classical music, Lucie Dehli started her musical career with a duet of experimental music with Stephan Ink in 1989 under the name of Vicious Circle. The french team became one of the very rare bands who entered the UK territory with their sound. The legendary English label SomeBizarre (Soft cell, The The, Einsturzende Neubauten...) took interest to Vicious Circle and signed their sole album Barbed Wire Slides. Often considered as ambient or shoegaze this album is in fact the missing link between 80’s cold wave and industrial 90’s, the common ancestor to Portishead et The Moon Lay Hidden Beneath A Cloud...Barbed Wire Slides is released in 1990, and has been reedited in 2009 by the French Label Infrastition.
Lucie Dehli and Stephan Ink came back later to France to sign two albums (Bike Ride, Life Goes on Again) under the name of View with the Les Disques du Soleil et de l'Acier label. The voice of Lucie Dehli brings them to the German label Hyperium samplers Heavenly Voices that will spread “Bikeride” all over the world. Few years ago she decided to settle in Belgium, in Liège. She took part to the experimental collective project of Jean Marie Mathoul -48 Cameras- (featuring David Coulter, Michael Gira, Rodolphe Burger..). In 2006 she gave birth to Elephant Leaf, a nuanced evolution of her previous works with Stephan Ink.
Lucie Dehli gave her voice, compositions and energy to differents projects, beyond them the Norwegian Jazz Band Ignore, the british progressive band SonVer, the British New Wave Band Attrition.
After she disbanded Elephant Leaf in 2010, Lucie quickly composed again. In her new compositions, she felt as a priority to make joy and depth co-exist. As for now, she offers us 4 cardinal points to listen to, as spots in her music. Anger, amazement, bareness, sensuality. 4 poles between which she makes us travel all along her shows.
Lucie Dehli is patiently setting her musical way as a songwriter, composer and singer, a free drawing without any boundaries.
Sites:
Facebook, luciedehli.com
Membres:
Lucie Dehli
Dans les groupes:
Elephant Leaf, Lucie Dehli, Vicious Circle (4), View (2)
Variantes :
Tout | Lucie Dehli
L. Dehli