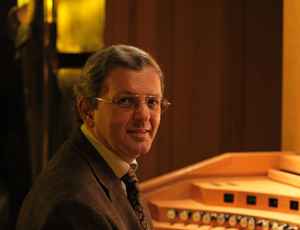 Already in the age of nine years he began taking piano lessons from Mrs. Gertrud Brodmann, Duderstadt. Then from 1966 he took organ lessons for many years, leaded by Josef Jung, organist at St. Cyriakus in Duderstadt. Further organ activities were deeply influenced by the cathedral organists Fritz Soddemann, Hildesheim, and Professor Clemens Ganz, Cologne. Since 1969 Hans-Joachim Trappe has been working as organist at St. Cyriakus, Duderstadt, at the cathedrals in Hildesheim and Münster and at the St. Joseph Abbey in Gerleve in his spare time. He has played in several national and international organ concerts, i.e. at the Cologne Cathedral, at the Salzburg Cathedral, at the Basilika “Onze lieve vrouwe” in Maastricht, at the St. Hedwigs’ Cathedral in Berlin, at the “Ulmer Münster” and at the Pauls Church in Frankfurt. He has played on television church services for the ARD and ZDF, and has given organ contributions for WDR and NDR television stations. Multiple CD records have been made, i.e. on the Klais-organ at the Cathedral of Hildesheim, on the great Silbermann-organ at the Cathedral of Freiberg, on the Arp-Schnitger organ at St. Jacobi Hamburg or on the Riepp-organs at the Basilika Ottobeuren. Professor Trappe is a member of several national and international organ societies.
Sites:
hans-joachim-trappe.de