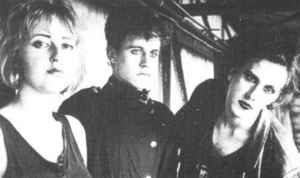 Profil:
Poésie Noire are a Belgian band that rose to prominence in the mid-'80s.
Jo Casters played in a band called De Frigo's around 1980. De Frigos merged with a symphonic rock band called Sofa (setting Phillippe Libberecht, Luc Leys (?), Johan Meylaerts AKA Jean Tempo, Luc Vanuffelen). Together with De Frigo's they took the new name The Next. George Scierski, bass player and singer, was brought in by Jo.

The Next morphed into A World of Ruins, which existed 1981-1982. The setting was Luc Seurs, singing. Renaat Deferm, drums. Jo Casters, guitar. George Scierski, keys and Johan Meylaerts, bass.

Their Belgian origins and tendency to develop a goth-oriented, synthetic, gloomy universe with low-pitched voices - Poésie Noire could translate by "Black/Dark Poetry" - had them categorized as EBM like other Belgian members of the 1980s electronic music scene like à;GRUMH... or A Split - Second. However, much in the manner of various renowned Belgian EBM bands like The Neon Judgement and, to some extent, Front 242, they declared, through their music, a will to step away from the usual industrial aggressiveness that characterized Electronic body music and developed a more mainstream accessible dark pop sound that helped them to be regarded as plain new wave or Darkwave.