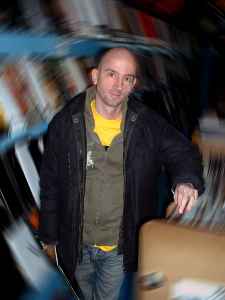 Vrai nom:
Fabrice Texier
Profil:
Fabrice Texier was born in May 68 in Lyon (South Of France) and raised in Marseille until the year 2000. Based now in Paris, Fafa began to make a name in the 80's when he presented a radio show, mixing Funk, Disco, Hip-Hop, and Dance-Music.
His "Mastermix Show" ended at the beginning of the 90's, when Fafa decided to implicate himself in the Techno scene, organizing and promoting many rave parties. In parallel, Fafa started to work on tracks and released his first EP in 1997.
But his career as an artist really took off in the year 2000 with the release of "Lucky Star", under the name of Superfunk, which sold no far off 1 million singles worldwide!
Since then Fafa has DJ'ed in the most famous clubs all around the world, cementing a reputation of a jack-of-all-trades DJ, playing the finest in all styles of music, deep-techy house, techno and all time classics.
A list of few clubs he played recently: Mykonos "Cavo Paradiso", Singapore "Centro", Ibiza "Pacha", Riga "Nautilus", Stuttgart "M1", Paris "Queen"...
Fafa is today acclaimed as one of the finest french DJ's and producers. His numerous remixes, for artists like Shirley Bassey, Moby, Cerrone or Depeche Mode are already considered as classics, and his DJ planning is always full.
As a very prolific artist, Fafa runs too since 2001 two labels, (Hypnotic Music and Goodtime Records), whose releases are played by the most famous international DJ's (Deep Dish, John Digweed, Danny Tenaglia, Satoshi Tomiie, Mousse T....) and his Radio FG show in Paris is quickly coming up on its second year as one of the most expected show.
Sites:
fafamonteco.com, MySpace, deejaybooking.com
Alias:
Fabrice Texier
Variantes :
Tout Voir | Fafa Monteco
F Monteco, F. Monteco, Fabrice Monteco, Fafa, Fafa "Superfunk" Monteco, Fafa (Superfunk) Monteco, Fafa M., Fafa Monteo, M. Fafa, Monteco, Monteco Fafa