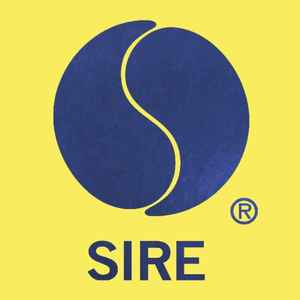 American record label founded by Seymour Stein and Richard Gottehrer.
The first release of the label was The Jam (3) - Loving Kind Of Way, late March or early April 1968. Around the same time Sire arranged a distribution contract with P.I.P. Records.
In April 1968 Seymour Stein flew to Europe and Far East to arrange distribution deals and signing progressive British and European bands who didn't have American label deals. The most successful artists from this era include Renaissance (4), Climax Blues Band and Focus (2), whose instrumental "Hocus Pocus" gave Sire its first Top 10 hit.

Please note that some US cassettes and 8-tracks have a SIR code on the spine or elsewhere near or above the catalogue number. This is not part of the catalogue number and should not be entered as such. Instead, it's a label identification code and may be entered in the Barcode and Other Identifiers fields in Other.
Sous-labels
Cave Music Limited, History Of British Rock, Just Say Yes, The Vintage Years
Label principal:
Warner Bros. Records
Coordonnées:
Sire Records
75 Rockefeller Plaza
New York, NY 10019-6908
USA
Sites:
sirerecords.com, instagram.com, YouTube, Wikipedia, bsnpubs.com, cvinyl.com, bsnpubs.com, vinylbeat.com