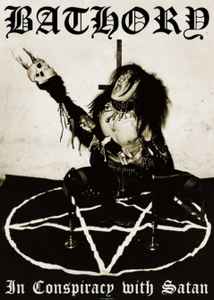 Profilo:
Bathory was an extreme metal band from Vällingby, Sweden founded on 16th March 1983, and named after the serial killer Countess Báthory from the Hungarian noble family. Fronted by Quorthon with a string of session players in the 1980s who usually only lasted one album.

Bathory is often cited as the pioneer of black metal based on the first four albums, and later viking metal in the end of the 1980s. All original songs were written by Quorthon, and only some of the later albums were recorded as a one-man band, namely Twilight Of The Gods, Destroyer Of Worlds, Nordland I and Nordland II. Quorthon stated that he used Satanic imagery for entertainment in the music, and he was known to criticize Christianity or other religions as hocus-pocus. Many prominent bands in black metal and viking metal mention Bathory as a big influence.

22 giugno 2020
Strange how many of the 2003 remasters are misprints as some tracks are combined as one, but then again black mark don't seem to give a crap about anything at all.
Visualizza 1 risposta

8 luglio 2018
Call From The Grave is by far the most awesome Bathory song ever.
Visualizza 1 risposta