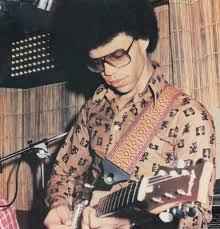 Vero nome:
Paulino de Jesus Santos Vieira
Profilo:
Paulino de Jesus Santos Vieira is a composer, orchestrator, multi-instrumentalist and singer, considered one of the greatest symbols of Cape Verdean music. He composed, among many other themes that marked the music of that country, “ M'cria Ser Poeta ” (his childish wish) or “ Um Minute D'Silence ” (music dedicated to his father). His famous rhapsody around known mornas, which brought together the main Cape Verdean artists, such as Bana or Dany Silva, is known . He was the man behind the beginning of Cesária Évora's career, having been the arranger and producer of the artist's main albums. In 1995, at Bataclan, in Paris, she performed one of Cesária Évora's most successful concerts . This remarkable concert remained in the memory of all the bold orchestrations, the remarkable interpretation on the piano and the brilliant improvisation with vocal harmonica around the lukewarm “ Rotcha Scribida ”, at the end of the concert.The Cape Verdean was born on August 31, 1956, in Aldeia da Praia Branca, in São Nicolau-Cabo Verde.
Siti:
rateyourmusic.com
Nei gruppi:
Voz De Cabo Verde
Varianti:
Stai visualizzando tutto | Paulino Vieira
P. Vieira, Paulinho, Paulino, Paulino Viera, Paulino Viéra, Páulino