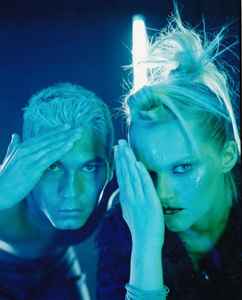 Profilo:
A meeting in 1996 with the well-known Italian producers Roby Santini, Gianni Fontana, Molella, Phil Jay and the singers Nathalie Aarts, from The Netherlands, and German Leguizamon, from Argentina, led to the creation of THE SOUNDLOVERS, a dance music project, and has realised, under the Do It Yourself label, the following successful singles:

From 2003 German Leguizamon does no longer take part of the group, so We Wanna Party was his last partecipation.
You might not always be able to recognise Nathalie in the various video clips that were produced, that is because she has always chosen not to be identified, to enable her to continue interpreting all her other music projects.

In August 2006, after a 2-year break, 2 new songs were published; the previously unpublished “Can’t Stop Dancing” and a cover version of the song by Eight Wonder feat. Patsy Kensit titled “I’m Not Scared”.

December 2007 sees the long awaited second release in Italy and Europe of the (first) single of The Soundlovers “Run-away 2008”, with new versions coming from Germany and one of our own producers Roby Santini “RSDJ”.

In July 2008 “My Body And Soul” was released, a cover of Marvin Gardens (1986), with the collaboration of Paolo Ortelli.

And after a 5 year “break” ……
In April 2013 four new remixes of Surrender “2K13” were released on DIY label and in June the remixes of Run-away “2k13“, which was the first single of The Soundlovers in 1996, that, first of all countries, became a hit in Germany thanks to Polydor Mighty (Polygram Hamburg).

And on Sept. 24th 2013 (the last release) one of Made in Italy’s most creative and successful production teams of the 90’s, reunited to reach the top again with the single “Be My Man” written by Molella, Roby Santini, Phil Jay and Nathalie Aarts, once again with the amazing Dutch singer on vocals.

Further to Molella’s version (Mollymix) you can find the versions by RSDJ and J-Art, collaboration by one of the legendary producers and one of the most interesting new teams of the last few years. To fill the package, the remix by Glossed Guys.
Of this song there are two video-clips available.