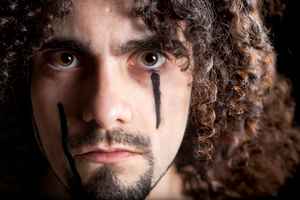 Profilo:
| slow wave sleep | started in 2015 from the squared pages of a diary full of sci-fi stories with characters that lately decided to become records. Founded by Emilio Larocca Conte, a guitarist turned producer from Italy, it developed the main concept by walking in the grey zone between musical styles and formats.

The new album "Spare time in the Arctic" is the last chapter of the saga that includes also a short film, a book and a VR game. The main character is Rèfles, who's made of plasma and descended from the world of Archetypes. Rèfles lately incarnates in Spiro in order to give back to humans the repressed emotions which he embeds. He can easily travel between Planet Earth and Planet Vena, a parallel dimension where there's no air, no money and no death. Spiro appears marked on the face by three black stripes, as showed in all SWS' music videos, which are linked together like a TV serie.