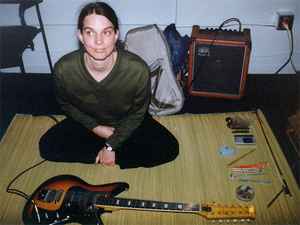 Vero nome:
Sue Ann Harkey
Profilo:
Singer/songwriter/multi-instrumentalist Sue Ann Harkey has been a part of Seattle and New York's underground music and visual arts scenes for over two decades. Her work, which has been referred to as "futurist folk," blends philosophical and political lyrics with improvised music inspired by free jazz, electronic, folk, and Middle Eastern and African elements. Harkey discovered improvisational music's power in 1979, when she began playing guitar with friends; this led to her exploration of the harp-guitar and the 12-string guitar, which she played with mallets, bows, plectrums, and rods, and which also featured alternate tunings and metal discs woven between the strings. By 1980, Harkey formed the cassette label/political pamphlet distributor Cityzens for Non-Linear Futures (CNLF) and the improv group Audio Letter. The group was co-founded by Harkey and violinist/songwriter Sharon Gannon, featuring Don Cherry and Dennis Charles among its revolving membership. Hailed as one of the cassette revolution's most important ensembles, Audio Letter released a prolific amount of tapes through CNLF as well as one album, 1988's It Is This It Is Not This. Harkey moved to New York in 1983 and became part of that city's improvisational scene quickly, collaborating with Sue Garner, LaDonna Smith, Lesli Dalaba, Chris Cochrane, Guy Yarden, and other players, many of which appeared on her 1989 solo debut, The Ancient Past and the Ancient Future Are Both Seconds Away. She returned to Seattle in 1992 and in addition to running her own design/illustration firm, Cactus Bones Studio, she released albums such as 1997's Fulcrum, which included free jazz players and DJs from the U.S. and U.K. underground.
Siti:
Last.fm, SoundCloud, Bandcamp
Nei gruppi:
Audio Leter, Fake Feelings Institute, Kitchen Table Ensemble, Les Objets Insolites
Varianti:
Stai visualizzando tutto | Sue Ann Harkey
Harkey, S. A. Harkey, S.A. Harkey, SAH