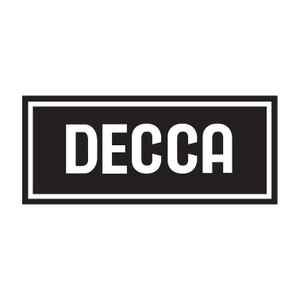 Former stockbroker Edward Lewis formed The Decca Record Company Limited in the United Kingdom on February 28, 1929. It was founded for Brunswick Ltd., which was founded locally by Brunswick-Balke-Collender and the German Polyphon Musik.The company started releasing records under the Decca trademark.

A US branch, Decca Records, Inc., was launched on August 4th, 1934. The first US Decca label was a Sunburst design (also referred to as three-dimensional) but that design disappeared in 1937. The sunburst design was replaced by a Decca in block lettering (also referred to as two-dimensional) mainly blue and red. This branch was sold off during World War II, but the UK & US companies continued to release each other’s recordings in their respective territories. In the UK, US Decca recordings were released on the Brunswick label from 1934 until 1968, when the MCA Records label was established. Brunswick was also used elsewhere in Europe and other countries. However, some European countries released recordings from the two companies on the same Decca label, sometimes with the extra slogan “American Series”.

In 1935, The Decca Record Company Limited contracted with EMI companies in Australia, New Zealand, India and elsewhere for the release of UK & US Decca recordings in those territories. This deal gave US Decca the rights to release recordings from the Parlophone and Odeon labels in North America.

In 1947, The Decca Record Company established the London Records trademark in the US, Canada, South America, and the Far East, as they couldn't use their own Decca trademark in those territories anymore.

In the early 1960’s, following MCA, Inc’s acquisition of US Decca, the company name appearing on releases became Decca Records, A Division Of MCA, Inc. The company name became MCA Records, Inc. in 1971. MCA Records was then established as an American label in 1973 to replace the Decca, Coral, Kapp Records, UNI Records and Vocalion labels.

At the end of 1968 Decca UK had stopped preparing separate monos and stereos for new recordings and instead relied on compatible mixes. There was a shrinking demand for mono, but still enough to make the issues lucrative. To save the cost of printing two different covers they made a common one with a die-cut hole top right on the back cover and separating the issues with different inner sleeves - blue stereo and red mono. This was used for most labels distributed by UK Decca record group (one exception being RCA).

The 1970s were disastrous for the UK Decca label. Although The Decca Company set up the first of the British "progressive" labels, Deram, in 1966, by the time the punk era set in 1977, Decca had become known primarily as a classical label. Label founder Edward Lewis died in January 1980, and PolyGram acquired the Decca labels within days of his death.

Decca was revived as a US label for reissues in the 1980’s and 1990’s, some of these in conjunction with the GRP label. Decca Records Nashville was also formed to release new country recordings.

In 1997, Seagram bought out MCA/Universal, giving them ownership of Decca US. They then acquired Decca UK's parent company PolyGram in 1998, thus consolidating Decca trademark ownership under the new Universal Music Group. The recordings from the two Deccas have not, however, been reconsolidated under the Decca label, with reissues of US recordings typically appearing on the Geffen Records, MCA Nashville, Verve Records and Deutsche Grammophon imprints.

Today, Decca is a leading label for both classical music and Broadway scores. Decca Music Group Limited also includes the Philips Classics label, and those labels are grouped together with the Deutsche Grammophon and ECM labels into the Universal Classics group.

This label contains releases on multinational markets. Do NOT create imprints for different countries.
Cover that information on new releases with the country field and with company links, rights societies, labelcode etc.

US:
Decca Records, Inc., later Decca Records, A Division of MCA, Inc. – US company founded in 1934; UK Decca started selling their shareholding c. 1939 and had completely divested their interests c. 1943. MCA Records, Inc. was the company name used starting in 1971, though the MCA Records label wasn’t established in the Americas until 1973. Also includes the MCA Classics label.
The London Gramophone Corporation, later London Records, Inc. – UK Decca’s second venture into the American record market, established in 1947, with a Canadian subsidiary established the following year. As the Decca name could now not be used, London Records was created for the bulk of releases from the UK company.
PolyGram Records, Inc. – US company which absorbed London in 1980.
GRP Records, Inc. – US jazz company/label, acquired by MCA Records, Inc.; reissued classic US Decca recordings of Louis Armstrong, Ella Fitzgerald, Billie Holiday and others on the Decca Jazz imprint in conjunction with MCA.
Geffen Records, A Division Of UMG Recordings, Inc. – Universal folded the MCA Records label in the early 2000’s, and any non-jazz or country reissues from US Decca or MCA now go to this label.
MCA Nashville, A Division Of UMG Recordings, Inc. – one of Universal’s current country music labels, which also encompasses reissues from US Decca’s country catalogue.
The Verve Music Group, A Division Of UMG Recordings, Inc. – Universal’s jazz division, which since 1999 has reissued several US Decca recordings on the Verve Records label, often with vintage label graphics.
Universal Classics – the US division encompassing the classical issues from Decca Music Group Limited and Deutsche Grammophon, the latter label now used worldwide for reissues from US Decca’s classical catalogue, notably those of Andrés Segovia. Also includes Decca Broadway, for new and reissued recordings of stage shows and film soundtrack albums from across Universal’s family of labels. For the older label design version see the Vinylbeat link below.

Belgium:
S.A. Fonior N.V. - Exclusive importer and distributor since 1934, also manufacturing local products since 1940, up to the company's bankruptcy in 1980.

19 settembre 2021
Champion Jack Dupree Decca LK 4871 Mono, is there any listing for a Factory Sample version of this release.

8 settembre 2019
Can anyone shed light on the Decca related LIFE Records label. I have DL 79121 with a label that looks just like the "color band" Decca label circa 1961-66, but instead of DECCA to the left, it has "LIFE". Fine print below is "Licensed and Original recording by Decca Records, a division of MCA Inc., New York, USA".
Both Sides Now Decca discography does not include it as a sub label, nor does Discogs.

27 settembre 2017
just wondering Decca was a uk lable .. but why i every record i look up made in portugal ??? are these the same ? as the legendery sounding decca releases ??
Visualizza 1 risposta