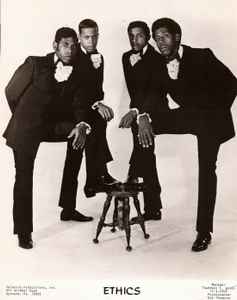 プロフィール:
Formed in 1967 in Philadelphia by Ron Tyson, Joe Freeman, Carl "Hugie" Enlow, and Andrew "Bike" Collins, managed by Thaddeus S. Wales, the Ethics combined Motown-styled songs with sweeping string and horn arrangements in a nascent version of what would come to be known as the Philly sound. Led by Tyson's considerable songwriting skills and Eddie Kendricks-like tenor, the group recorded for independent labels Wale, Vent and Golden Fleece, turning out songs like "Standing in the Darkness" and "I Want My Baby Back" that certainly deserved a wider audience than they received. Working with Vince Montana's rhythms and Thom Bell's sophisticated horn and string arrangements, the Ethics were truthfully just a little ahead of their time. The Ethics had split by the time the 1970's dawned and after Vent Records folded, and they watched from the sidelines while newer soul groups like the O'Jays followed the same template to massive success. Tyson later joined the reconstituted Temptations put together by Otis Williams.
エイリアス:
Love Committee
メンバー:
Joe Freeman, Ronald Presson
バリエーション:
すべてを閲覧中 | The Ethics (2)
Ethics