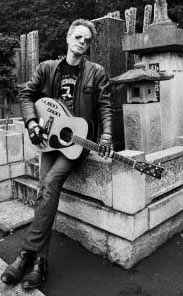 Akiyama became an enthusiastic hard rock fan when he was eleven years old, and started playing electric guitar at the age of thirteen. Later, he also came to be very interested in free improvisation and classical music. He formed the improvised music band Madhar in 1987. He also started playing classical viola, and formed the Hikyo String Quintet in 1994. The band, which played avant-garde improvised classical music, consisted of a viola, two cello, and two violin players, and included Taku Sugimoto on cello. Sugimoto soon left the band, which thus became a quartet. Later that year, Akiyama and Sugimoto launched their guitar duo, Akiyama-Sugimoto. They played gigs in New York in 1995, and in the Midwest (including Chicago and Detroit) in '96. For about a year starting in early 1994, Akiyama was also a member of Nijiumu, one of guitarist Keiji Haino's bands.