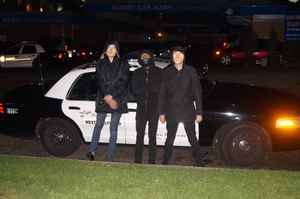 プロフィール:
Death Grips is an Experimental Hip Hop group from Sacramento, California formed in late 2010 and consisting of vocalist Stefan Burnett (aka MC Ride) and production team Zach Hill and Andy Morin. Their live performance setup consists of Burnett on vocals, Morin on keyboards and Hill on drums. They usually operate under their own label, Third Worlds.

On April 26, 2011 the group released their debut mixtape, Exmilitary. On February 27, 2012 they signed with Epic and announced the release of two albums for that year. The first, The Money Store, was released on April 24th. The second album, No Love Deep Web, was scheduled to be released in Fall 2012, but the label seemed unwilling to officially release it yet. The band took matters into their own hands and put it online for free, leaving Epic. Their subsequent commercial releases would be made under Harvest. On November 13, 2013 Government Plates was released, again as a free download.

On June 8, 2014 the double album The Powers That B was announced, with the release of its first half, Niggas On The Moon, as a free download. The group publicly announced their apparent disbanding on July 2, 2014, cancelling their scheduled tour dates, and claiming they still planned to release the second half of the album, Jenny Death, later in 2014. After much speculation, it was finally announced it would be released on March 31, 2015. A new tour was announced on March 24.

On October 21st of the same year, they uploaded a video to their YouTube page titled "Bottomless Pit", along with posting on their social media pages that this would be the title for their next album. The album was leaked in its entirety from the band's SoundCloud page via Reddit on April 29th 2016, and officially released on May 6th, 2016.

2022年4月9日
Wish the pre-exmilitary EP had a physical release. Only death grips material I'd care to own.
返信 通知を希望する 1 Helpful

Stefan Burnett's monolithic, larger-than-life vocal presence, Zach Hill's awe-inspiring drumming skill and his often-unorthodox approach in sound design and production, in-hand with Andy Morin, firmly puts Death Grips in their own league, one that would leave a lasting impression on the modern musical landscape.

At this point, Death Grips have already left behind an incredibly iconic back catalogue, with each of their main album releases being hugely significant in their own ways.

True fearless trailblazers who, in years to come, will be seen as legendary experimenters.
返信 通知を希望する 7 Helpful

2015年6月1日
If Terrance McKenna wrote hip-hop to describe his experiences with various substances, methinks this would be it.
返信 通知を希望する 3 Helpful

one of my fave bands of the later years, now sadly to be discontinued.

i discovered them last year after the money store's artwork was posted on my feed. after the breakcore crowd around me slowly dwindling and the dissatisfaction of Alec Empire's recent music output and ATR's reunion, this felt like the perfect replacement. loud, often odd cryptic lyrics and frantic drumming. Each album so far has been a different experience, from the sample laden Ex-military to the recent more psychedelic Govt. Plates. recommended if you like Techno Animal, Dalek, ICE, and Industrial hip hop...