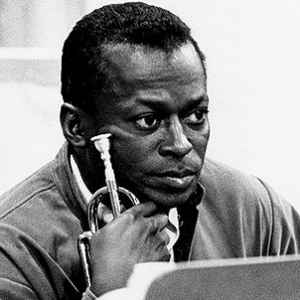 本名:
Miles Dewey Davis III
プロフィール:
Trumpeter, bandleader, composer, and one of the most important figures in jazz music history, and music history in general. Davis adopted a variety of musical directions in a five-decade career that kept him at the forefront of many major stylistic developments in jazz. Winner of eight Grammy awards.

Miles went to NYC to study at the academic school for musicians, where he met Charlie Parker. They started playing together from 1945. In 1948 Miles Davis started to make his own ensembles, at that time he met Gil Evans, The Miles Davis Nonet was born. From the few recordings they made in 1949 to 1950 came the album "Birth Of The Cool" (1957), with Davis and Evans going on to work more together in the future.

Miles Davis was one of the musicians who introduced the 'Hard Bop' in the mid 1950s. In the late 1960s he started to experiment with electronic instruments and rock and funk rhythms. In the mid 1970s he stopped playing because of health problems, though in 1980 he made an 'electronical' comeback.

Inducted into Rock And Roll Hall of Fame in 2006 (Performer). Winner of Eight Grammy Awards.

2022年6月22日
Wanna get into Miles? For me it was Milestones to Someday to Seven Steps to Miles Smiles then Bitches Brew and the early 70's stuff. I listened to Miles later 70's/ 80's albums but never was a huge fan of Miles taking a back seat in his playing. Nevertheless, Miles was a huge mentor for young talent and he's just as important as Ellington and Blakey when you look at the contingent of music his musicians put out. Right now, I'm listening to Paraphenalia off In The Sky.

2022年3月4日
My Davis gateway - John McLaughlin guitar on Jack Johnson then tracing drum icon Tony Williams career back from his Lifetime albums into the 2nd Quintet with Carter on bass. Then you jump into those wild live groove albums Live Evil, Agharta and Dark Magus. Davis and Macero and all that talent just let each other take there turn and showcased each musician. A lot of fun OMG moments with the interplay of sound. Chill and Thrill.

2022年1月13日
There is no right way to get into Miles, just pick a couple of random albums and go. You'll find something you'll like eventually.

2021年2月9日
Biggest inspiration to me as an artist. Thanks Miles for everything you did for music.

2020年5月14日
Not a big jazz fan, but I Love the proggier tracks on "Bitches brew", "Big Fun" and "Get up with it". Pleaseguide me on to similar tunes,not only with Miles,but any artist.
8 返信を見る

As I sit here listening to Shhh/Peaceful, I think to myself: few artists have brought me so much joy.

2018年12月31日
Miles' true genius might have been his ability to spot and nurture talent. Not saying he couldn't play a bit himself, but holy lord above just look at the players that he put together. As great a talent-scout and band-assembler as the world has ever seen. Made sure they kept him on his toes as well. Imagine having the bottle that late into the game (by which point he'd, to invoke the man himself, only changed the face of music two or three times) to pull together the Second Quintet - some straight-up-not-even-exaggerating prodigies, all hungry, all pushing, all trying new stuff - and forcing yourself to keep pace with them. Biggest of brass balls required.