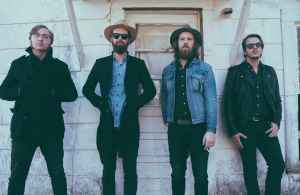 プロフィール:
Muscle Shoals, AL
Nashville, TN
“NOT HERE” is the new full-length LP from THE POLLIES, a band that has been defying genres and stepping over boundaries since their first release in 2012.
It’s their first release for Florence, AL’s Single Lock Records, and it shows the band shedding their alt-country skin in favor of experimental noise and unadulterated risk.
"Not Here" is how I felt when I wrote the majority of the songs for this record,” lead singer and songwriter Jay Burgess says. “I was almost living parallel to myself. I’m watching myself react to what some people probably view as "normal life occurrences", but for me, someone who’s never been through these "normal life occurrences", it was very difficult.”
Burgess is the songwriter behind The Pollies, and on “Not Here”, he hits on all the familiar topics— love, loss, triumph and regret— with an edge and ferocity that shows up on tracks like “Lost” and “Jackson”. Simply put, these are compelling stories—and Burgess has stepped into his own as a gifted storyteller.
“Love lost is what drives the record lyrically,” Burgess says. “Some of these songs started as musical ideas—where I’d record something on my phone and then go back 3-4 times and make sense of the words—and other songs were just there without a lot of work.”
“Lost”, the record’s lead single, started as one phrase and a host of different musical ideas.
“It was a song that I had sitting around with unfinished and unrealized lyrics,” Burgess says. “I’d do multiple recordings of it with different lyrics. One phrase I kept coming back to was “I wish I was lost”. For weeks, that one line stayed on my notepad. Soon after that, a friend of mine found out his marriage was falling apart. I was someone for him to talk to, and after one of our conversations one night, the words for “Lost” just fell into place.”
Another standout track, “Jackson”, came together in a much quicker fashion—with a far different focus.
“I’ve always been into revolutions—more specifically thinking about what things would be like if they hadn’t happened,” Burgess says. “Obviously, a major movement in this country’s history was the Civil Rights movement. I think about how long that effort took and how great the risk was and it’s amazing to me. I thought I had heard all of the stories that went along with the movement until I heard the story of Jimmie Lee Jackson.”
“At the time, there was no movie explaining him and his involvement with the Selma story. He’s pretty much the reason Dr. King came to Selma, and I found his story inspiring in many different ways. I had to write something about him, and frankly, I could’ve probably done an entire record on him.”
The subject matter changes, but the themes remain: love, loss, triumph and regret. It’s clear that Burgess is the kind of songwriter that throws a lot of curveballs. Accompanied by a deft and accomplished band, “Not Here” is the kind of statement that signals the arrival of a great American band.
サイト:
Bandcamp, thisisamericanmusic.com, Facebook
メンバー:
Ben Tanner, Chris James (36), Clint Chandler (2), Daniel Stoddard, Jay Burgess (2), Jon Davis (6), Matt Green (12), Reed Watson, Spencer Duncan
バリエーション:
すべてを閲覧中 | The Pollies
Pollies