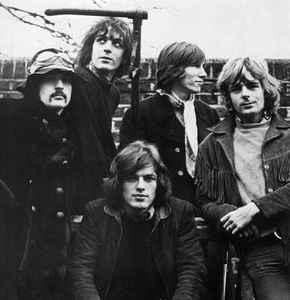 プロフィール:
Pink Floyd was an English rock band from London. Founded in 1965, the group achieved worldwide acclaim, initially with innovative psychedelic music, and later in a genre that came to be termed progressive rock.

Don't know what got into someone, to remove my previous post.
Left out the bootlegs PF themselves made official downloadable
and streamable for some time, this time. A PM should be appropriate.

I'm a big PF fan, to me their pre-Wall stuff has something extra special, a kind of magic later
on was was gone for me and my friends back then. 'More', 'Ummagumma' and to some extent
'Atom Heart' are still underrated in our opinion. I tried many times to like it, but simply couldn't
get into all their 80s stuff. Anyway for collectors like me, this -most compact list, to collect all
official released, pre 1979 recordings, once- might be helpful. 'Works' is only on it for some
vastly different mixes, was in doubt to add the mono mix version of 'Saucerful'.
While 'Obscured' is also included in 'Early Years 65-72'.

I will update this list as changes due to new releases occur.
Moonhazle.

2021年9月1日
Is it possible to find a Nigel Gordon film about Syd Barrett's travels in the Gog-magog hills somewhere ?..
1 返信を見る

I wonder if there are plans to release any of the other Pink Floyd albums on SACD? Umma Gumma because of its extraordinary manipulation of sound, would definitely benefit, and on a selfish whim, I’d like MORE on SACD.
4 返信を見る

2021年8月21日
Nicely written history José and I do agree with what you write. Especially the bit you say about Dark Side of the Moon being reviewed “to death”, I’d include Wish You Were Here in that group. And that can be the problem with focussing too much on ‘bests’: bests can then get blown out of proportion and Obscure other important work.

Following that sentiment, about over-trumpeting certain items, it is then a bold statement to make, that Meddle is the first “essential” album. Yes, it is a beautiful consolidation of their musical journey, in some ways a more cohesive album than prior. But in the context of enjoying / understanding Floyd, what does “essential” mean? One key, or “essential” part of Floyd is Syd Barrett AND the spirit of Syd Barret, “How I Wish . . . “. So, the first works of Floyd I’d say, are “essential”.

Looking at the first four Floyd Albums they demonstrate a phenomenal musical catalogue, encompassing a range of styles and experimentation. And of course primal Floyd is not just about Syd. I love the ‘hippy dippy’, more playful and innocent stuff, of The Gnome and Bike. (Who was first with their Gnome song – Bowie or Floyd?). This work nascently places Floyd as a rock group with feet firmly planted in the psychedelic movement (some rock / pop groups would kill for this). MORE is one of my favourite albums of all time and Umma Gumma is a huge flight of the imagination. In fact roughly half way through “Echoes” (13 mins), which you site as an epic masterpiece, the squeaky sounds are pretty much identical to the sounds from the explosive track, Several Species of Small Furry Animals Gathered Together in a Cave and Grooving with a Pict.

This ‘range’ of musical style, mostly evident in the first five or so albums, is partly what make Pink Floyd so epic. It is incredibly bold, sensational music, you never knew where they would go next. This is fantastically exciting for a lover of music. After Meddle, and I have to be careful here not to accuse of a lack of imagination, but the range of experimentation, detours, an openness to the universe, newness of sound, rawness, this range is considerably narrowed. In its place is a focus, each album would have strong themes as you describe and Floyd developed a recognisable sound, a Pink Floyd Brand consistent to each subsequent album – not breaking that mould thereafter. (That doesn’t mean Floyd had finally reached their goal of what they were ‘meant to be’ OR demean their initial work as ‘not yet fully formed’.)

Pink Floyd have amassed a wide range of work and hence can mean different things to ‘fans’. Because of the Dark Side of the Moon, Wish You Were Here and The Wall albums getting a lot of the attention, and some see those albums as being the ‘main’ Floyd albums, popular opinion can see this as the core of what Pink Floyd is. But it’s all individual taste, contagious culture, hype, and ‘prat reviews’ as you say. . . . Stating what is “essential” can set traps, become exclusive and limit where people choose to explore. To be just as ‘bold’, I’d say, all you need of Floyd are the first four “essential” albums (but then people would miss out on so much MORE).
1 返信を見る

2021年8月9日
What's not to like about Pink Floyd? However, it depends on what phase of Floyd you are talking about? The first three albums, are all Psychedelic, and are an acquired taste. If you like British, mid 60's psychedelic, they're for you, if not, avoid. Then we have two albums of experimentation, Atom Heart Mother, and Meddle. Atom Heart Mother is a mix of psychedelic and prog. Again, its not to everyone's taste, and the title track can ramble at bit at times. I really like it, but then, that's because it leans towards prog, and not so much psychedelic. Meddle is, again, a bit of an oddity. The first side of the vinyl is made up of fairly laid back, often quite lightweight rock tracks with a psychedelic tinge. Side two, all one track, the epic Echo's, is, quite simply, a masterpiece. Superb musicianship which creates a wonderfully atmospheric sound, even creepy at times, with the vocal intro and outro setting the scene. It makes Meddle the first 'essential' Pink Floyd album. After Meddle the band becomes dominated by Roger Waters songwriting and the lyrics and songs become thematic, with all of the remaining Floyd albums, before his departure, being 'concept' albums. Dark Side of the Moon has been reviewed to death by both fans and prats (sorry, 'Music reviewers/critics') and as those reviews are so easy to find I won't waste your time. Suffice it to say, I first heard the album as a child, and I still love it nearly 50 years on. Up next comes the album Dave Gilmour rates as their best ever in terms of musicianship, Wish you Were here. The album deals with Waters disillusion with the music business and the album has some of Rick Wrights most powerful ever keyboard work. Sadly, it also marks the end of his writing input, a source of later friction between him and Waters. It also features the vocal of Roy Harper who they recruited to do 'Have a Cigar'. After a two year break, they released Animals, a take on big business and people of influence in society. Musically its Floyd's bleakest album, with a very 'cold' tone to it. Lyrically, Waters really takes aim at some of his least favourite characters, using, 'surprise', animals in the same was as Orwell to identify them. At the time I found it hard to get into, now its one of my favourites. As the 70's drew to a close, Waters offered the band two new albums worth of material. One, a concept based around his feelings about being distanced from Floyd's audience, and how that impacted on other aspects of his life, and another about growing old, and grasping one last chance at being young and free. The band chose the former. The Wall, as it was later titled, was both a double album on vinyl, and CD. It covers various themes, childhood, the impact of relationships, mental collapse, and the concerns Waters had over the UK's lurch to the right in the late 70's. Brilliantly played, phenomenal live, it was Floyd's last 'great' album. After the Wall, one last album with Waters, the less than satisfactory, and too bleak even for Floyd to get away with, 'Final Cut' brought the Waters Floyd days to an end. Gilmour won the rights to the name in court, released two poor studio albums and one dull live album with his version of Floyd, then called it a day.
3 返信を見る

2020年8月29日
Great band, helped me get into music as a whole and I still give some of their records a listen or two every now and then.