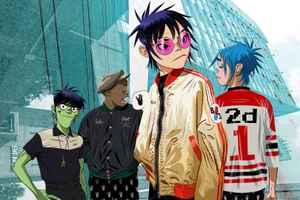 プロフィール:
Virtual band founded in 1998 by Damon Albarn from Blur, and comic-book artist Jamie Hewlett designing and drawing the band. It can be found in The Guiness Book of World Records under Most Successful Virtual Band. When the band were first created in 1998, the original concept was a group named 'Gorilla', with a slightly different lineup.

The lineup of characters is:
2D (3) - Lead singer, keyboards, additional instruments. Gained his nickname from injuries he sustained in a car accident (vocals performed by Damon Albarn).
Murdoc Niccals - Bassist, additional instruments. Sold his soul and middle name to the devil for the band's success.
Noodle (2) - Guitarist. A Japanese expat, she was shipped to the band in a crate at 8.
Russel Hobbs - Drummer. An American expatriate, possessed by the ghosts of his late friends; Creator of Hobbs Hot Sauce.

Former members:
Del The Ghost Rapper - Rapper. One of the above friends, he was sent to the afterlife by the Grim Reaper following their first album (vocals performed by Del Tha Funkee Homosapien).
Paula Cracker - Guitarist. 2D's girlfriend of two months, she was kicked out of the band for having an affair with Murdoc. She was a part of the band when they were known as 'Gorilla'.
Cyborg Noodle - Guitarist. Robotic replica of the real Noodle who replaces her on Plastic Beach.
Ace (102) - Bassist. Former Gangreen Gang member (from the cartoon The Powerpuff Girls), joined in 2018 to fill in for Murdoc while he's serving time in jail after being framed for smuggling.
There was also an actual gorilla who played bongos, also during the band's time as 'Gorilla'.
サイト:
gorillaz.com, bandtraq.com, Facebook, instagram.com, MySpace, SoundCloud, Twitter, Wikipedia, YouTube
メンバー:
Cass Browne, Damon Albarn, Dan Nakamura, Jamie Hewlett, Miho Hatori, Remi Kabaka Jr., Teren Delvon Jones
バリエーション:
すべてを閲覧中 | Gorillaz
G'Z, Gorilla, Gorillas, Gorrillaz, Gurrillaz, The Gorillaz, Xg O R I L L A Zx, ゴリラス, 街头霸王, 街頭霸王