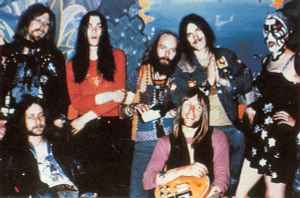 2021年9月2日
A few isolated tracks excepted ,Hawkwind's (Brock) post 90s releases are mediocre at best .
The Hawkwind logo is just a name for Brock solo releases . "Hawkwind" being a powerful brand name ofcourse , can't blame he uses it to exhaustion. But in the meantime he pisses on its legacy ,just like the Strolling Bones do .
Not to forget the later album cover 'art' , which seems to be cobbled together on Dave's own PC in a few spare moments . Often about those bug eyed aliens . Countless punters lap it up though. 🖕👽
4 返信を見る

2019年2月9日
I bought their 1st album after hearing it in HMV in Oxford Street when it was released. Saw them soon after at the Red Lion in Barnet with David Bowie backing them, never been able to prove it though.
4 返信を見る

2017年9月21日
Bought the first LP as soon as it came out, and have basically bought everything else, and most 'Friends and Relations', since. My favourite band of all time (just trumping Tangerine Dream and Van Der Graaf Generator, my other favs and must haves), long may they reign, and in what ever form. xxxX Vorrn

2017年1月1日
One of the great underground bands made good, saw them at imperial college Gower street 1970 I think, then lots of times after, with the lovely buxomed Stacey dancing away great times, and fantastic light show, once seen never forgotten.
1 返信を見る

Hawkwind are a legendary band and I love their sound/visuals/lyrics and what they represent. Whether the latest band tickle your fancy, it is all personal choice. I have made a lot of good friends at their shows over the last 4 decades, some still intact, some gone and some mad...... and long may the band in any form and us all continue to do what WE want to do.......

2015年3月5日
Absolutely nothing wrong with the current line-up. Strongest and most 'together' the band have been in decades!
Live performances continue to get better :) Watch out for the re-recorded Space Ritual!
1 返信を見る

2014年10月5日
when hawkwind get rid of that bass player they have now i will buy there records again.
4 返信を見る

2014年5月11日
The best UK band from the early '70s imo. The first six albums are virtually faultless. You can hear kosmische vibes in the music... plus the distant, faraway sound of punk rock... still a few years away. Opa-Loka off 'Warrior..." sounds like NEU! (and of course Dave Brock wrote sleevenotes for the 1st NEU! album [they shared the same record label; UA]). Hawkwind gave free music to the people, took a space-rock anthem into the charts and had a truly anarchic 'don't give a f*ck" attitude at a time when most UK 'prog' musicians were taking themselves far too seriously. Plus - they had Lemmy - the Bootsy Collins of space-rock (the albums started to go downhill once Lemmy left). Astounding Sounds indeed.
3 返信を見る