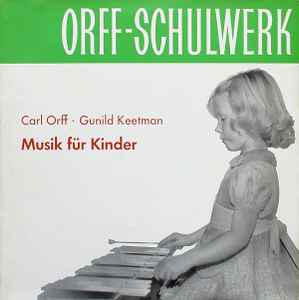 Profile:
From 1956 to 1958 Columbia Records recorded, produced and released Musik für Kinder, a two record set that corresponds to the first two published German volumes of Orff Schulwerk music. The LP’s under the Columbia label were each released separately. A later reissue under Columbia’s EMI/Electrola Dacapo label packaged the two records together. An army of choirs and ensembles were employed for the recording project including: a children’s speech choir and instrumental ensemble under the direction of Gunild Keetman and Carl Orff; the Chor der Augsburger Singschule under the direction of Joseph (Josef) Lautenbacher, the Kinderchor des Trapp’schen Konservatoriums, München under the direction of Richard Boeck; and the Münchner Chorbuben under the direction of Fritz Rothschuh. Gunild Keetman took on the responsibility of coordinating and directing most of the rehearsals and the performance. True to the developmental approach of the Schulwerk, the pieces featured on the recordings are often extended in terms of form, language and instrumentation. Orff states in his autobiography that the recordings “were important for the further dissemination of the Schulwerk idea.”