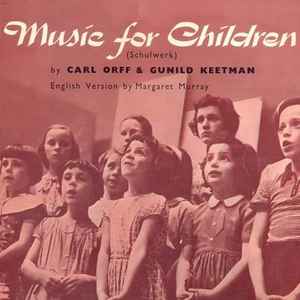 Profile:
The same developmental treatment heard on the "Musik Für Kinder, Orff Schulwerk" recordings can be heard on the "Music For Children" English edition recordings. Margaret Murray, who adapted and translated the original German Schulwerk repertoire for English audiences, did not have much time to prepare the material. The plan was to record in early summer 1957, only five months after the German edition recording session. In addition to finding and adapting English nursery rhymes and folklore, various groups of children and percussionists had to be found and coached. A set of Studio 49 instruments was imported. The recording sessions took place for a period of two weeks in mid June. Gunild Keetman was invited to oversee and conduct.

As with the examples in the published volumes, the songs and pieces featured on the recordings were not to be considered parts of a blueprint, to be meticulously followed in every detail, but rather thought of as outline sketches that could be varied, modified or extended. The recordings, which again included material solely from the first two English published volumes, were reviewed by The Gramophone magazine, once in 1958, and then again in 1972. The 1958 review approaches the recordings as if they were produced with children as the target audience. This is both unfortunate and short sighted as it leads to a less than flattering review. The review from 1972 approaches the recordings more accurately by realizing they are not for children to listen to but rather they are “a demonstration for adults of a course for children to take part in, which is an entirely different thing.” The reviewer continues, stating that they "expected a boring session — four sides of 'teaching music'; but I was happily entertained by such a range of attractive sounds and settings. Everything is very short and items succeed each other with the quick-fire precision of a well produced variety show. The children sing and play with such evident enjoyment that this in itself is infectious. Some of the song settings, too, are of real beauty, for all their simplicity —often indeed, because of it."

Once again, two LP’s were released separately under the Columbia label, only to be packaged together when later reissued under the Angel and EMI labels. Ensembles employed for the English edition recordings included: the Chorus of the Children’s Opera Group under the direction of Margaret John; the Chorus of the Bancroft School for Boys under the direction of J.G. Wright; and the Italia Conti School Speech Ensemble. The instrumental ensemble was directed by Carl Orff, Gunild Keetman, and Walter Jellinek (Margaret Murray's husband).