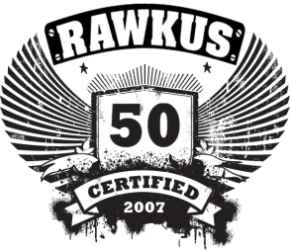 Profile:
The Rawkus Network brand imprint launched by Rawkus as a competition on their social media site. Artists could submit their work and Slopfunkdust, as Rawkus 50 A&R Director, would select the 50 best albums to be released with a "Rawkus 50 certified" imprint. The competition started on November 27, 2007 and the chosen 50 best albums were then released digitally on December 27, 2007 distributed by IODA's (Independent Online Distribution Alliance) digital distribution network. The artists also had the option of releasing physical copies on their own as well while utilizing the Rawkus 50 imprint on the release.

Note: All 50 releases do not have catalogue numbers and are separate from the label's own catalogue.
Parent Label:
Rawkus
Sites:
rawkus.com