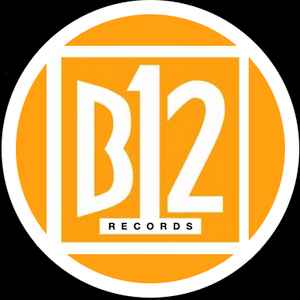 Profile:
B12 Records was founded in 1990 by Mike Golding and Steve Rutter as a vehicle for themselves and other like minded individuals to release electronic music for listening and dancing. Many thought the duo hailed from Detroit, as their sound fused many of the elements of techno coming from the Motor City, alongside labels such as Transmat and Plus 8. Every record was hand-engraved in the run out grooves, with cryptic clues and messages, recurring themes of futurism and science fiction.

Releasing under a series of monikers, such as Redcell, Cmetric, and Musicology, their connections with Kirk DeGeorgio’s A.R.T. Records are well documented, each artist featuring on the others label, and even a pair of split 12”s with a label taking each side of the vinyl. The pair were also snapped up by Warp Records, featuring on the seminal Artificial Intelligence series and releasing two albums and an EP on Warp under the umbrella name ‘B12’

Then in 1996, with test pressings of B1215 in their hands, they disappeared without warning or reason. B1215 never made it to release.

Forward to 2005. Illegal bootlegs of old B12 material are circulating – poor quality, without the engravings in the run-out grooves. Mike & Steve return to play a live show in London to a sell-out crowd (the bouncers had to stop queues inside the building). B12 absolutely blew everyone away, a decade away hadn't dampened their sound one bit. The applause at the end was so overwhelming that the following act was shouting at the crowd to shut up and stop cheering so he could begin his set. They announced there was new material to come, and their intentions of re-mastering the back catalogue for release on a 12 CD box set, with bonus unreleased materials.

Now, in 2007, B12 Records has exactly the same goal it did in 1990, to provide quality electronic music for futuristic feet and forward thinking minds.

April 23, 2018
According to Michael Golding and Steve Rutter who started B12 Records, it was named after one of their favourite presets on the Akai AX80 synth (“it sounded like a Larry Heard track”)
Reply Notify me 2 Helpful

We have not repressed any of the older releases. These records are illegal bootlegs, and not mastered from the original plates - they are most likely ripped from CD or mp3, or even recorded from the old vinyl onto CDR.

You can check if the vinyl you have is genuine - all B12 releases have messages etched into the run-out grooves. Also, the bootlegs often have a poor quality label print and tinny/trebley sound.

There are still some shops shamelessly still buying and selling these, claiming that 'we thought they were real' even though they came from a dodgy bloke who turned up in the shop, rather than from our distributors Rubadub, and also ebay sellers claiming to have the originals - so CHECK BEFORE YOU BUY!

If you see any shops selling what they claim to be old stock or 'repressings' - please let us know!!!

We will be making the old material available again - the back catalogue has been completely re-mastered, and will be released on a 12 disc CD box set later this year, with bonus remixes and unreleased tracks. So if you're looking for old B12 - please be patient and get the genuine article!

July 4, 2010
Of the many adjectives I could use to describe the sound of B12, perhaps the most personal may be "sensitive". Sensitive not in a limited way, but sensitive in all its meanings: each track released is a perfect balance of rhythm and melody, obvious in tenderness and attention to detail. There were NO tracks released on B12 that ever sounded incomplete or rushed. The output of the label may have been small, but the effect was tremendous; the claim to a distillation of Detroit style with British experimentation may be oversimplified, but is evident.

No less an authority than Alex Paterson has claimed B12 to be floor-burners, capable of rousing a tired and heavy-footed public to dance with abandon. B12 is exactly that, yet so much more. One album was titled "Retreat from Unpleasant Realities". I can think of few better summations of their output.
Reply Notify me 10 Helpful

The music that came from Detroit in the late 80s was so important to me.
Artists such as Carl Craig , Derrick May and Juan Atkins literally created a unique style of their own that became Detroit Techno.
Step forward Michael Golding and Steve Rutter in the early 90s , two guys who played these icons at their own game and in my eyes beat them with soulful, emotional and intelligent thinking music.
The B12 label was obviously paying homage to Transmat and Fragile but they had this more mysterious edge than there peers.
A roster of likeminded talented musicians, amazing artwork, ultra limited runs on coloured vinyl and promos that would filter through from small time distributors like Great Asset, Mo's music Machine and Greyhound.
I remember this dodgy bloke from London used to come up in a grey transit van to the record shop i worked in and he had all these amazing records on board for sale and every time i would be guaranteed to take all the B12 stuff off his hands.
These were special records from a very special time.
Every B12 record is for the thinking man / woman.
Truly timeless pieces of Sound n Art and to hear they are back in the studio recording new material brings a huge curve to my face!

August 31, 2003
B12 to me was the essence of DEEP!!! These 2 fellows, some say, spawned IDM (for lack of a better word) music and their records will go down in history for being some of the most legendary timeless music of the modern music age.
Reply Notify me 8 Helpful