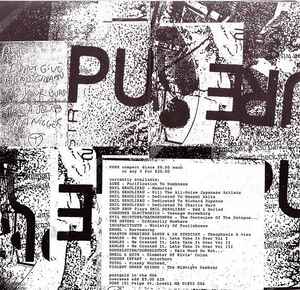 Profile:
Pure was started in 1994 by RRRecords as a series of very affordable CDs by a wide range of experimental and noise musicians.
All releases were packaged in identical black & white slipcases, with a sticker on the front giving the artist and title. Most also included a fold-over insert advertising other releases in the series. The release notes were typically part of the CD artwork itself.
The series was officially stopped as of January 1, 2000. All remaining Pure CDs were later repackaged by RRRecords in black sleeves with new cut-up style paper covers pasted on, unique to each release. However, the label did have one posthumous release in 2005 (LHD's "Opaque", in the original Pure packaging).
Parent Label:
RRRecords

December 3, 2021
respect and huge thanks to Ron for releasing so much amazing, wonderful, obscure industrial/noise/experimental acts for such low and friendly price. we salute you!