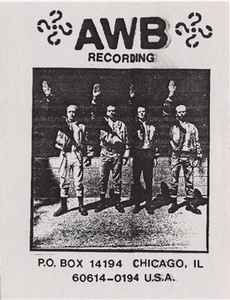 Profile:
Extreme power electronics label run by Mark Solotroff. Initially based in Chicago, IL and later in NYC. The label began in the mid-1980s and ceased operating in 1994. Some early cassettes were licensed from Zeal SS. The label was effectively replaced by Mark Solotroff's current label, BloodLust!.

Nothing was ever released under either AWB 017 or AWB 019.

27 For Sale
Vinyl and CD

July 1, 2015
Very controversial label - even in the already controversial Power Electronics genre. The association with groups such as Terre Blanche, The Grey Wolves and Slave State resulted in many accusations of racism from the industrial community. It got to the point that Korm Plastics released "Anti-White Bastards", a tape compilation openly decrying the actions of this label.

Regardless of the accusations, AWB Recordings put out a lot of very good Industrial music releases in its short existence before Mark formed the Bloodlust! label. The label remains an interesting piece of noise history.