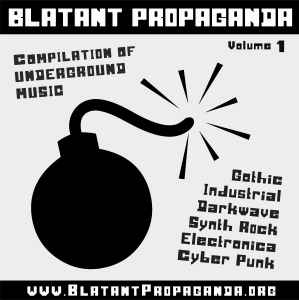 Numerous songs on Blatant Propaganda releases have achieved significant national airplay in Australia via: the national Triple J (JJJ) radio station network (of the ABC, Australian Broadcasting Corporation); on SBS radio (the Special Broadcasting Service); on the community radio satellite (ComRadSat) network; and with videos broadcast on ABC-TV (the "Rage" program) and SBS TV (the "Alchemy" program). Songs have also been broadcast on radio in the UK, Germany, France, the USA, Canada, Mexico, New Zealand and South American nations.

The Blatant Propaganda label has released tracks by more than 50 music groups, bands and solo artists/musicians; mostly via the various artist compilation CDs. The compilations have had several distinct themes including: "Songs of Protest" for political protest music songs; "S.I.N.G.E.D" for (mostly Australian) underground artists producing Synth-pop-punk, Industrial, Noise, Gothic, Electronica, Darkwave; and several volumes of "Electricity" featuring electronic (dance) music produced by groups, solo musicians and DJs living in or from the city of Canberra.

The most active period for the Blatant Propaganda record label was during the mid-1990s to the mid-2000s. The releases including several compilation CD albums of various artists plus singles, EPs and albums by the founding group Eye (3) and the offshoots like DJ Citizen (aka. Robot Citizen) and Aya (2) - which eventually became known as Elf, then E.L.F. then XELF. Those are Blatant Propaganda's core music artists. Other artists whose albums the label promoted and distributed include TDM (Tedium), Dark Network, Continuum and Organarchy Sound Systems (ie. Non Bossy Posse).

During the 90s and 00s the label's main distribution outlet was through a network of 40+ independent record stores in Australia and via a network of underground mail-order record labels and zines around the world.

Songs by Blatant Propaganda's core music artists have also featured on more than 40 compilation CD and cassette albums released by other record labels in the USA, Canada, the UK, other parts of Europe, Australia and South America.

During the second half of the 2000s the label went through several years of dormancy. It reactivated via http://www.BlatantPropaganda.org
As of late 2018 around two-thirds of the early albums and collections have been re-released on Bandcamp.
Compilations of various artists are at https://BlatantPropaganda.bandcamp.com

Digital releases by the label's core artists are currently available via specific bandcamp pages for Eye (3), Aya (2) and DJ Citizen with more to come for those and also for E.L.F. and XELF. Some of the releases by EYE are available through other digital channels ilke itunes, amazon, spotify, deezer.
Further re-releases are scheduled to occur during 2019 and the early 2020s.

Since the early 1990s Blatant Propaganda people have been consistently involved with promoting hundreds of other music groups, bands and musicians through radio shows, zine reviews and music events.

From the mid 1990s through to the mid 2010s Blatant Propaganda personnel hosted around 500 shows on community radio stations in Australia. These radio programs included: "Sunset" weekday drive-time shows; Australian and Canberran music artist programs; "Beatside" - electronic dance music shows; and "S.I.N.G.E.D" for a variety of dark alternative music genres with a core theme of industrial and gothic music styles. The radio programs had a strong focus on showcasing unsigned underground independent music artists. Dozens of musicians were also featured via interviews and live in-studio performances.

During the late 1990s and early 2000s several issues of a photocopied "Blatant Propaganda" 'zine were produced. More than 1000 copies were distributed via international mail-order zine networks. The zine featured reviews (by DJ Robot Citizen) for dozens of self-released independent music artists from around the world. Many of these reviews are online at http://www.BlatantPropaganda.org/reviews/underground.html

Another significant project of the label is the website http://www.AustralianGothicIndustrialMusic.com which profiles and features songs and links for music by several hundred music groups, bands and solo musicians from around Australia and New Zealand, in the related dark alternative music genres.

The record label's founder has been known by the titles of J. Citizen, DJ Citizen, DJ Robot and DJ Robot Citizen. As an organiser, promoter and nightclub DJ they have been involved with more than 400 alternative music club nights, band concert nights and music festivals; mostly in the city of Canberra; also in the Australian cities of Sydney, Melbourne, Perth and Newcastle. An archive history of those events can be found at http://www.DJRobotCitizen.com

While the label was formed and based in Canberra the personnel have resided, before and after, for significant periods in other Australian cities (Melbourne, Sydney, Perth) as well as the American cities San Diego, Newark (New Jersey), Los Angeles and New York City (NYC), USA.
Contact Info:
Send an email via [email protected] the .org website address.
Sites:
BlatantPropaganda.org, Bandcamp