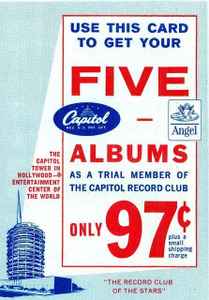 Profile:
Mail-order division of Capitol Records, Inc., launched November 1957 to compete with RCA Victor Record Club and Columbia Record Club. The Club sold Capitol releases exclusively until 1964, when it began licensing many popular releases from other labels. With the creation of Capitol Industries in 1968, the Club was sold to the Longines Symphonette Society, who continued operation through 1975.

Identification
With few exceptions, “Capitol Record Club” was not mentioned specifically on US releases (notable exceptions are the inner sleeves of some MGM Records and Verve Records titles). The most immediate visual identifier is the legend “Manufactured by Capitol Records, Inc.” on non-Capitol-label albums, or “Manufactured Under License From Capitol Records, Inc.” on the labels of Capitol-label albums. "Distributed by the Capitol Record Club for its members" was printed on the labels of Canadian releases. A second catalog number, with standard Capitol prefixes but numbered in the “90000” series, is another identifier. Capitol-label and affiliate label (Apple Records and Tower) Club releases made between 1969 and 1972 featured three diagonal “hash marks” printed in the border of the upper left corner.

Club releases of non-Capitol label LPs usually have the original label’s catalog number on jacket in addition to a Capitol-style 5-digit catalog number (the 9000 series) beginning with a T-, ST-, SWBO-, SKBB- etc. prefix on labels. (See below for detailed explanation of the numbering system.) The Club-unique number was generally printed prominently somewhere on the jacket but in many cases it would only appear on the spine or on the inside of a gatefold jacket.

1958 – 1964
The numbering system used for Capitol Record Club issues varied based on the original label of the recording it offered and when the Club offered it. Between 1958 and 1964, the Club issued only Capitol releases, and records sent to subscribers were the same as those sent to retail. Special “club-only” releases were numbered in the 90000 series. Prior to 1964, a few releases originally on other labels were pressed with Capitol branding and 90000 series catalog numbers, for distribution to Club members.

1964 – 1968
In 1964 the Club began licensing deals with other labels to allow them to offer other titles to Club members. Capitol Record Club pressings of other labels’ titles had a 90000-series catalog number on their labels, in additional to the original company’s catalog number on the cover. Capitol releases sent to Club members were still identical to retail copies.

1969 – 1973
The December 14, 1968 issue of Billboard reported that the Longines-Wittnauer Co. had acquired Capitol's Direct Marketing Corp., which included the Capitol Record Club. Beginning in 1969, Capitol Record Club releases were issued by The Longines Symphonette. Capitol-label releases during this period were pressed by one of Decca Records’ two U.S. pressing plants, with an “8” added to the catalog number just after the prefix (sometimes with a dash, i.e. “8-“, and sometimes without). Non-Capitol-label Club releases continued to be pressed by Capitol, with catalog numbers continuing in the 90000 series.

Additional History
The Club’s monthly magazine, "Keynotes" was sent to every subscriber. This magazine contained an article or two on featured artists plus a listing of the Club releases being offered at that time. It also contained their "Selection of the Month" listings by category which was automatically shipped to each person who did not return the "Selection of the Month" slip by a specified date.

In 1975, the Club was shut down due to dwindling membership and sales. Capitol then licensed its catalog and current release titles (excluding The Beatles recordings) to Columbia Record Club - Columbia House, and later to the RCA Music Service.