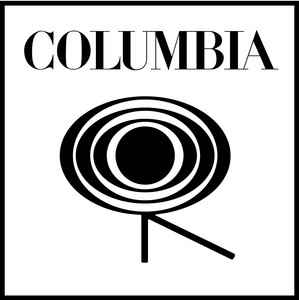 For all unofficial / bootleg copies of this label please use Columbia (2).
It opened a British operation shortly afterwards. This was sold in 1922 to its own management, and then the independent Columbia Graphophone Company Ltd. itself purchased its almost bankrupt former parent in 1925. This was then merged with The Gramophone Co. Ltd., which had been set up in the UK in 1896. This company was incorporated as Electric & Musical Industries Ltd. (EMI) in 1931. US anti-trust laws forced the UK company to divest itself of its US operations that year.

Today, Columbia (walking eye) remains one of the four flagship music labels operated by Sony Music Entertainment worldwide except in Japan, where Columbia (magic notes) is the primary imprint of Nippon Columbia.

Note some releases during 1986 up to 1991 (on record labels) have the ⎊ upside triangle (which looks like a Fallout Shelter) on the label marks this era of pressing. Found on Columbia Records Pressing Plant, Carrollton, GA https://www.discogs.com/label/442751-Columbia-Records-Pressing-Plant-Carrollton-GA and also Pitman https://www.discogs.com/label/447694-Columbia-Records-Pressing-Plant-Pitman On Lp's or 12" singles it helps designate the A side. This symbol does also appear on some CD's and cassette tapes.

I must say that for a community that thrives on a level of detail such as mould SID codes, the approach of merging all records using the Columbia name under one undifferentiated label is rather weird... Yes the Columbia brands had a common start, yes Sony ended up buying back the right to use the brand... but the catalogues were distinct and have remained so, meaning differences in copyright, marketing, distribution, availability... which we should be interested in clarifying, not blurring.
IMO you cannot bring knowledge on the history of these labels (plural) and other imprints that derived from the divide (CBS in Europe, Angel in the USA), while throwing all the releases in one big pot ("The one with the Columbia name on it")

December 8, 2021
EPC-247
Mexico
Leda Moreno
A1 Corazon
A2 Dime La Verdad
B1 El Trenecito
B2 Diablito Loco
The front of the sleeve looks like the LP Columbia – DCA-215.