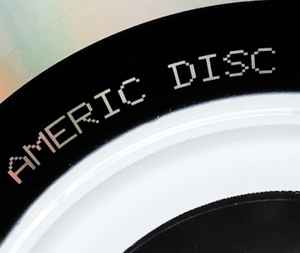 In 1997 the RIAA sued Americ Disc for knowingly, or recklessly disregarding the fact that many orders it accepted for pressing were counterfeit discs. As such, some CDs manufactured by Americ Disc prior to this have been found to be counterfeit.

The company is now part of the "AmericDirect" group which owns other US pressing plants in Miami (Florida) and Modesto (California).

Matrix numbers:
There are several matrix number formats, none of which have been proven to be sequential, so please do not enter these codes as catalog numbers. Do, however, try to enter all the text from the matrix area, including the exact way that the company is mentioned.

One of the common formats has the format X<Y>Z, where:
X = usually a 5-character alphanumeric code with unknown meaning, often starts with a number.
Y = apparently a client ID, i.e. what record company the disc was pressed for. Usually 3 digits.
Z = catalog number or other client-supplied ID.