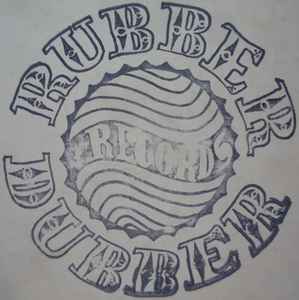 Profile:
A US-based bootleg label (active in the late 60s into the early 70s) that made live concert recordings and illegally issued the shows on vinyl. Rubber Dubber was shut down and defunct by late 1973. Note: Any bootleg releases post 1973 (on CD or vinyl) are NOT true Rubber Dubber products.

"For those of you not old enough to remember, Rubber Dubber records were live concert bootleg recordings that were first marketed in plain white double jackets with the Rubber Dubber logo stamped on them. I first got involved with Rubber Dubber Records in the summer of ’70. I wasn’t playing music in bands at the time, so when I was offered a job in the print shop of a record pressing plant in Grand Prarie, Texas, I took it. I found myself printing the record labels for Jimi Hendrix, Led Zeppelin, Crosby, Stills, Nash & Young, etc., never realizing that these were bootleg recordings.

One of the founders of Rubber Dubber was so impressed with me that they invited me to be a part of Rubber Dubber and move to L.A. Heck, he was even taking the secretary back to L.A. Rubber Dubber cancelled their contract with The Record Plant, and pulled out all the remaining stock. [In L.A.] I met the other partners of Rubber Dubber. They were living high on the hog off the profits. I learned much later that the artists never received a dime in royalties from any of the recordings. We rented a warehouse in East L.A. and ran the operation from there. We decided to use the contacts we had gathered (my mid-west sales had doubled their database) and use the telephone instead of travel. We had our own shrink-wrap machine in the warehouse and had employees to do the shipping. The warehouse doubled as a big party/jam room and we had some parties. It was during this time I bought an electric piano and got serious again about piano along with guitar.

We would buy tickets to concerts well in advance. Chuck would take the recorder in on a backpack. On two occasions, I crippled in with a shotgun microphone stuck down my britches. I recorded a back-to-back piano duet concert by Elton John and Leon Russell. I also recorded Neil Young. We knew that it was illegal, but I believed that the fans wanted it and that the artists would get paid from it.

The partying lasted until the day the U.S. Marshals showed up with an injunction and a cease and desist order. We later regrouped in Malibu and operated out of there for a while. but I decided to move to Oregon. I wanted to distance myself from the situation. In Oregon, I did some telephone business from up there, but Rubber Dubber soon died." - by Jerry Rigged
Sites:
texaschainsawmassacre.net, theamazingkornyfonelabel.wordpress.com, rollingstone.com

7 For Sale
Vinyl and CD