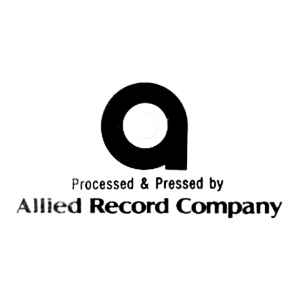 Profile:
Pressing plant/manufacturer in Los Angeles, California, known as Allied Record Manufacturing Company prior to 1962. Purchased by Warner Communications Inc. in 1979 to become part of WEA Manufacturing. Vinyl pressing assets were sold to Music Connection, Inc., and moved to Pennsylvania to form 33 ⅓ RPM in 2002.

B-00000 and R-00000 can be added as LCCN numbers for Pressed By. When there are two different codes (i.e., one per side), add Pressed By twice and add the respective code (see example).
When another pressing plant identifier (e.g., "R/S Alsdorf") is present, use Mastered At - Allied Record Company as role. When unsure, do not add this plant.

NOTE: The Allied machine-stamped logo in the runout etchings can be easily mistaken for a "Q" or a "Ω", but is actually lowercase Greek alpha, sometimes with a Warner "W" within. Add "[Allied 'ɑ' logo]" on its position in the matrix string in the BaOI fields.

Additionally identification can be made as follows:
1.) A lone "A" embossed in the label area like this would indicate it was pressed at Allied Record Company.

2.) An "E A S T" embossed around the center hole like this would indicate it was pressed at Specialty Records Corporation using metal parts that were originally made for use at Allied Record Company based on the etchings. NOTE that usually the "T" is the most visible, sometimes the only really visible letter.

4.) Records that have the Allied "ɑ" logo along with an "AL-SP" etching and a "B-#####"-type matrix number in the runout "deadwax" indicates that the Plating (Processing / Metalwork) was done at Allied Record Company but the record itself was actually pressed at Specialty Records Corporation. In such cases, add Allied Record Company as "Mastered At" and also add Specialty Records Corporation as "Pressed By" in LCCN.

Some Atlantic/Warner Bros.-related releases (including sublabels and partner labels) with often have an "-AR" at the end of the printed matrix numbers on the center labels indicating Allied Record Company as the pressing plant.

-Identifying Cassettes Manufactured At: Allied Record Company-
Cassettes made at Allied will have an "AR" printed on the cassette itself like in this example (as opposed to a printed "SR" on the cassette, which would be for Specialty Records Corporation).

Allied Record Company remained an independent pressing plant until it was purchased by Warner Communications Inc. in 1979, becoming a branch of WEA Manufacturing Inc.

November 20, 2021
My vote would be Allied. Specialty used Allied metal components. Glad to see your question.
Reply Notify me Helpful

Which is a better plant, Allied or Specialty? I have releases that are pressed at both and always wondered if there was any difference.