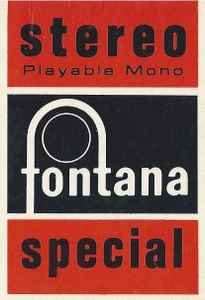 UK VARIANTS
In the UK, Fontana Special was introduced in March 1968 with a retail price of 12/6 per record, rising to 13/11 a little later. Its campaign slogan was "FONTANA SPECIAL STEREO SERIES SETS A NEW STANDARD IN VALUE". The SFL 13000 series and SFL 14000 series were launched at the same time, the latter primarily devoted to classical releases.

The earliest UK releases had a 3-section logo on the top right of the front cover:
Top: "stereo" in large text with "Playable Mono" underneath in smaller text - black text on a red background
Middle: Black and white "fontana" logo
Bottom: "special" in large text - black text on a red background
Furthermore releases with this logo had flipback sleeves with no lamination on the back.

Not long before the series was withdrawn in the UK at the end of March 1972, the catalogue number style changed to an entirely numeric 7-digit format, dropping the SFL prefix. These releases included the words "SFL Price Code" in a square box underneath the catalog number on the sleeve back.

A number of UK Fontana Special releases subsequently reappeared on the Contour label.