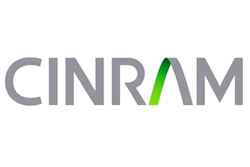 Originally founded July 28, 1969 by Isidore Philsophe and Samuel Sokoloff as a manufacturer of eight-track cartridges in Montréal under the name Cinram Ltd./Cinram Ltée. In the early 1970s it expanded into cassettes and by the mid-1970s the Montréal plant was Canada's largest manufacturer of tapes. The Montréal plant also added 6 record presses by the 1980s.

Cinram opened a record pressing and tape duplication plant in Scarborough, Ontario in 1979 and moved its head office to the location. The plant was outfitted with a new computerised Neuman lathe for lacquer cutting that was originally meant to upgrade equipment at RCA Studios, Toronto but RCA sold off the studio instead and the lathe went to Cinram. In November 1985 Cinram purchased the entire record pressing operation of Quality Records Limited and moved all of the equipment to the Scarborough plant. Record pressing ceased in the fourth quarter of 1991.

Cinram's first CD replication plant commenced operations March 27, 1987 in Markham, Ontario. At the time they were the only Canadian CD plant to manufacture their own jewel cases as well as pre-master and glass master in-house. In 1988 Cinram bought out its competitor Praxis Technologies Inc., the first CD Canadian manufacturer.

Cinram expanded into the US in 1990 with the purchase of PRC Recording Company, Richmond, IN (which became Cinram, Richmond, IN).
CD production at this plant began approximately mid/late 1992, and LaserDisc production in 1993.

On December 8, 1996, Quixote Corporation entered into the negotiation process of selling Disc Manufacturing, Inc., Huntsville (including manufacturing plants in Anaheim, CA and Huntsville, AL) to Cinram Ltd. The purchase by Cinram was completed March 27th 1997. The Anaheim plant was later closed in 2001. The Huntsville plant remained open until at least 2012, at which time it was involved solely in DVD manufacturing.

In 1997, the name was changed to Cinram International Inc. In July of that year, they reached an agreement to acquire PolyGram's cassette and VHS manufacturing facility in Amersfoort, the Netherlands. This followed the acquisition earlier that year of Mayking Multi-Media's video duplication facility Videoprint in Ipswich, UK.

A French CD manufacturing plant in Louviers was purchased from Universal M & L, France in 2000 and became Cinram Optical Discs.

In 2014 Cinram moved its Canadian production operations out of Toronto and shifted them to facilities in Olyphant, PA and Huntsville, AL. Finance, marketing, and distribution operations however remained in Toronto. In the same year, Cinram purchased a CD/DVD manufacturing plant in Tuscaloosa, AL, and a fulfillment centre in Kennesaw, GA from JVC Kenwood Corporation. It was announced in January 2015 that Cinram was to close the Tuscaloosa plant.

Cinram's disc manufacturing assets were finally sold to Technicolor in 2015.

Plant Identifiers
Cassettes manufactured by Cinram can be identified by a CI or CR on the shell, usually below the catalogue number..

Records pressed at the Scarborough plant from 1979 until 1991 can be identified by a CR etched in runouts, a CR stamped in a circle in the runouts, or a CR or CI printed on the labels.

The date of the CD glass master can be determined from the Cinram matrix number.