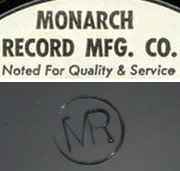 Profile:
Monarch Record Manufacturing Company - Plating and pressing plant in Los Angeles, CA. Re-branded as Electrosound Los Angeles in January 1985. Discs pressed by Monarch usually have a stamped, encircled "MR" in runouts (sometimes found reversed). The etched letters "MR" were also used occasionally during the '60s and '70s, and exclusively post-1985 -- refer to profile images for examples of each.

Many early '50s/'60s records pressed at Monarch lack the "MR" stamp, and only contain a standard processing (plating/metalwork) 'delta' number , i.e. △00000, which is common to many processing plants and pressing facilities. Many early Monarch pressings that lack the (MR) stamp can still be identified based on known association with the releasing label, printed plant codes on record labels, AND the standard 'delta' number, but the existence of a △00000 etching does not by itself denote a Monarch pressing. Alco Research And Engineering, Co., for example, used a similar 'delta' numbering system.

The Monarch pressing plant identity is also evidenced on Atlantic & ATCO recordings by an "MO" suffix to the matrices. See ATCO Records for details of this (and other ATCO plant IDs).
Pressings on PolyGram labels from 1979-80 were identified on the label by a '24'; A&M releases pressed by Monarch sometimes had a 'C' displayed on the label.

History
Monarch was founded in 1945 by Nate Rothstein and Nate DuRoff (sometimes spelled Du Roff or Duroff), the latter remaining with the company well into the late 1970s. Around 1948, the plant moved its operations to 4852-54 West Jefferson Boulevard in Los Angeles, California, its home for the next three decades, pressing records for both major and independent labels from the 1950s to 1980s. During most of this time, 45rpm records were pressed on polystyrene.

In March 1961, Monarch was purchased from Rothstein and DuRoff by Cosnat Record Distributing, parent company of Jay-Gee Record Corporation which owned Jubilee and Josie Records, though the two men would continue to operate the plant. (Cosnat changed its name to Jubilee Industries, Inc. on 01 Aug 1966.)

In June 1970, Monarch and its parent, Jubilee Industries, were purchased by Viewlex, Inc; thereafter, Viewlex made Monarch a wholly-owned subsidiary, incorporating the plant into its other pressing operations which included American Record Pressing Co., Allentown Record Co. Inc., and Sonic Recording Products, Inc. Viewlex filed for bankruptcy in 1976, reorganizing two years later as ElectroSound Group, Inc. In 1978, Monarch moved to a new pressing plant at 9545 San Fernando Road in Sun Valley, California, upgrading to new presses with the move. Around this time, the stamped (MR) found in deadwax since 1960 disappeared, replaced by a handwritten 'MR'. Presses were also upgraded, and the 2.875″ chamfered pressing ring identified with historical Monarch Lp pressings pressing was replaced with a two-plane ring - small center ring with a shouldered outer ring - like that of parent Electrosound. Within a few more years, Monarch ceased pressing 45s in styrene and switched to pressing entirely in vinyl.