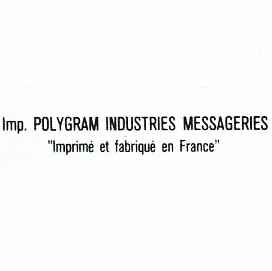 Profile:
Please don't use prior to 1978.
Polygram Industries Messageries was a French Polygram company, active under this name between September 1978 (officially from 1 January 1979) and 1986. Succeeding C.I.D.I.S..
'Industries' refers to cover and label printing, disc cutting, record pressing and cassette duplication.
'Messageries' refers to warehousing, distribution and logistics.

Polygram Industries Messageries operated two plants - one in Louviers and one in Antony.

Record Pressing
When 'POLYGRAM' or 'POLYGRAM I.M.' is found in the runouts, please add Pressed By - Polygram Industries Messageries.

The Louviers plant made injection moulded 7" discs using an embossed printing system.
While Louviers pressed 12" discs during all those years, Antony pressed 12" discs only up to ca.1984.
However, it has been impossible to find criteria allowing to allocate a specific plant.

LPs pressed by Polygram Industries Messageries have a pressing ring of 20mm in diameter:
- black bare vinyl center ring (or black plastic center ring)
- or looking like 2 rings around the spindle hole (different from German narrow central ring)
- or also with a second embossed outer ring (from ca.1984, sometimes also with a faint elevation at 58 mm)

Note: In rare cases, 'POLYGRAM' is found in runouts but LP has none of the 3 types of pressing rings described above (or 7" has no injection moulded labels). Please check profiles of other plants (PRS Ltd., PRS Baarn, ...) and / or ask a question in forums about those unusual cases.

Cassette Manufacturing
Both plants manufactured cassettes but it is not known how to detect and differentiate them.
However, Duplicated By Polygram Industries Messageries can be used where:
- 'Made in France' is on the cassette labels, AND
- 'POLYGRAM' is upside-down underneath the cassette window.

The Louviers plant was bought by Philips and Du Pont and renamed PDO, France in August 1986.
It obviously took a while to change the pressing equipment, so POLYGRAM can still be found on releases until 1987.
In these cases, please use Pressed By - Polygram Industries Messageries.
Sublabel
Polygram Antony
Parent Label:
PolyGram
Contact Info:
[all info obsolete]
26 Avenue Winston Churchill 27400 Louviers, France - Phone: 32.40.76.55
2 Avenue Maurice-Ravel 92160 Antony, France
Sites:
books.google.fr, books.google.fr, books.google.fr