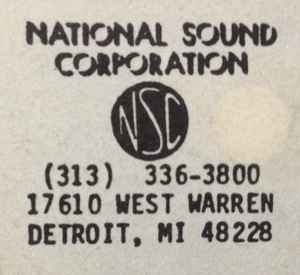 Legendary mastering studio where releases by many Detroit techno artists were mastered, cut and engineered.
In 1989 Steve Martel and Ron Murphy decided to open a store specializing in old phonograph records, situated at 17610 W. Warren in Detroit, Michigan called National Sound Corporation. Ron Murphy had been mastering records since the mid 1960's for recording artists such as Isaac Hayes and Forest Hairston.

When forming National Sound Corporation, Ron and Steve had the idea of also being able to cut Dub plates and records for use in their customer's jukeboxes, and so some record cutting equipment was also set up in one of the shops back rooms. Shortly after opening, they were visited by Derrick May and Juan Atkins who, while looking for records, noticed the cutting lathe and asked about having some acetates made. After cutting a couple of dubs for Derrick and Juan, Ron was told that there were a lot of Detroit producers that needed a local place to have dubs and masters cut. Ron decided to upgrade the equipment while Derrick and Juan spread the word about the new cutting service.

The first master to be cut was Plus 8 Records Ltd. label, followed a week later by Underground Resistance label. Since those first masters back in '89 there have been thousands that have followed, all inscribed with the initials NSC. Producers were encouraged by Ron to make their records unique, by including information and phrases written onto the records, and even going as far as to talking Kevin Saunderson into cutting one of his records in reverse, and cutting locked grooves for Jeff Mills' Discovers The Rings Of Saturn project.

The death of Steve Martel in 1994, and the subsequent problems that arose with the remaining estate, led Ron to purchase the equipment and relocate the recording service to a new location, the success of which had already led to the closure of the retail side of the business. The new name chosen was the Sound Enterprises, however Ron continued to put the old NSC logo on each master produced, in memory of Steve Martel without whom the business would have never been started.

November 18, 2018
Ok so I am sure this will get a lot of people off side however this isnt meant to be a nasty review nor am I questioning the legacy of people like Ron. I have well over 100 records mastered at National Sound Corporation and whilst I love each and everyone of them I find they all have that National Sound Corporation sound which in my opinion is generally for lack of a better term scratchy almost sounding like the stylus has a build up of debris upon playback.
I have done a lot of A/Bing of the same track between a NSC master and a D&M master (here is my breakdown Måuriziö* - Ploy ) and when you sit them side by side NSC masters are generally toppy and in some cases quite harsh, now I know D&M masters are on the warm side most of the time however my view is that generally NSC masters more on the harsh sometimes brittle end of the mastering spectrum.
I am sure they is a few exceptions to this rough rule however after listening to a lot of their masters over the years I cant help but feel this way.
All that said maybe that is what helped set all these artists a part from everyone else, a unique sound that was all their own.
Reply Notify me Helpful

The history, the foundation, the spiritual encounter.

Ron Murphy rest in peace was a true genius. he is responsible for so many legends becoming legends , sometimes he is left out in the background, shadowed by the tracks given to him... by his own work,. it is even tragic when you think about it, a teacher casted away from the stage because of his pupils.

but let us all grand what this person has given to dance music as it is, and see how we truly miss him. sometimes when you listen to an Underground Resistance record like "Amazon" you can really hear the incredible skills this guy had on engineering and mastering on the composition, his spirit is there as much as Mike Banks.

It is so important to remember this humble personality never the less then any Jeff Mills ,Robert Hood, Ron Trent, Chez Damier or Carl Craig that he has worked with, and he worked with quite a few's.....