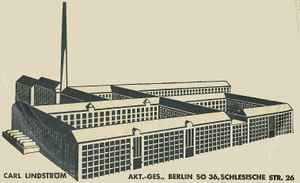 Profile:
German multinational corporation, who ran the Odeon and Parlophone labels. It traces it's origins to a grammophone factory funded in 1896 by the Swedish inventor Carl Olef Lindström, who sold his fonographs and grammophones under the names Lyraphon and Lynophon.

In 1904 Lindström sold his workshop to engineers Max Straus and Heinrich Zuntz of Salon Kinematograph Co. GmbH, company founded in 1902 that sold Lindström grammophones under the name Parlophon (now Parlophone). While the pair became the company's directors, Lindström was retained as chief engineer and designer. The companies were merged to form Carl Lindström G.m.b.H. ; In 1906 Zuntz died and was replaced by Otto Heinemann, his brother in law. The company went public as Carl Lindström A.-G. in 1908 in order to raise more capital. By 1906 it had already sold 150000 grammophone machines.

Lindström was exclusively a grammophone manufacturing and sales company until 1910 when the first Parlophon records hit the market in Germany. Backed by the inmense success of his grammohpones, Lindström initiated an agressive expansion program:
Through 1910 to 1914, the company adquired the local German and European companies BeKa-Record A.-G. in 1910, International Talking Machine Co. m.b.H. turning it's factory into the Odeon Werke, Società Italiana Di Fonotipia & it's UK branch Fonotipia Co. Ltd. in 1911, Dacapo-Record Company M.B.H., Lyrophon-Werke GmbH in 1912 and Favorite Record A.-G. (previously Favorite GmbH) in 1913.
The final tally of labels by 1914 was Parlophon, Beka-Grand-Record, Era Grand Record, Era (7), Scala-Record (3), Odeon, Fonotipia, Jumbo-Record, Jumbola, Dacapo-Record, Lyrophon, Atlanta (3) & Favorite. Of these, Jumbo-Record, Jumbola, Era, Scala, Dacapo, Lyrophone and Favorite were discontinued. Beka-Grand-Record was renamed Beka and retained as a budget label, Era Grand Record was licensed and became ERA (11) operating on Argentina. Fonotipia in Italy operated as a factory and recording agency for Odeon. Atlanta was a Dacapo license managed by an Argentinean record company that appropriated the label during the world war.

In 1911, through the Odeon imprint, the company enters an exclusivity deal with brazilian Fred Figner's Casa Edison Fred Figner and in 1913 builds International Talking Machine Co. Ltd. record company, which would be soon known for it's Fábrica Odeon factory.

Somewhere between 1910 and 1914, Carlos Domingo Nasca, previously held a deal with BeKa-Record A.-G. for the Era Grand Record label, reinstituted the same deal with Lindstrom for the now rechristened ERA (11) label, having the masters pressed by the Odeon Werke. All the records were from a matrix series 6X.XXX. With, or without permission, Lindström reissued these records through a large series of micro labels. These include: Victoria Record, Victoria Gemini, Chantecler, Gayarre, Parlophone Record, Phono D'Art. It is unknown if Nasca himself was in charge of them or it's a separate company. It's also unknown what record store ("Casas" - large stores from the 00s and 10s that often held exclusivity deals with record companies) commercialized them. Some of these recording would be also pressed in Nasca's second label, Disco Artigas

With the adquisition of Fonotipia, and the opening of a French franchise, By 1914 Lindström owned factories in Berlin, Paris, Viena, London and Milan.

In 1914, on the onset of WWI, Otto Heinemann emigrated to the USA with the intention of selling phonographs and Odeon records, and created the Otto Heineman Phonograph Supply Company, Inc. in Nov. 1915.

WWI caused the loss of major company factories, including the Berlin Odeon Werke and factories in Paris and the UK and the company was forced to cut ties with Società Italiana Di Fonotipia in 1914, Argentina's ERA (11) and with Otto Heinemann's company in 1917, eventually recovering the former in 1922. Heinemann however remained independent and launched the Okeh label in 1918 and Era remained as an independent label before going defunct.

After the war, the company recovers, but Lindström resigns in 1922. In 1920 or 1923 Lindström creates The Parlophone Co. Ltd., a new london factory dedicated to the Parlophon variant, Parlophone and open a branch of the same company in Australia, Parlophone Co. Ltd., circa 1926.
By the mid 20s, Odeon offices were present in most of Europe, colonial UK, colonial France inc. Indochina, Japan, Central Europe, Russia and Latin America. Most of these franchises, which doubled as grammophone and record stores, possesed recording capabilities and had the dual responsibility to "import" recordings to Europe and produce recordings to the local market, whether from their own factories or by adquiring pressings from Germany. During the 20s and 30s, around 70% of the Odeon repertoire were pressed for export.

The Columbia Graphophone Company Ltd. acquired a substantial share of the Carl Lindström AG, eventually controlling the company in 1926. When Columbia Graphophone and The Gramophone Co. Ltd. merged to become Electric & Musical Industries Ltd. in 1931, their respective German daughters Electrola Gesellschaft m.b.H. and Carl Lindström AG now belonged to the same UK parent company. Consequently in 1932 Electrola's own production facilities in Nowawes near Berlin were closed and Carl Lindström AG became the manufacturing arm of Electrola GbmH. As part of the restructuring, Lindström A.-G. came to manage the German label Homocord.

Max Strauss resigned as director in 1933 and emigrated to England under pressure of the nazi regime in 1936, losing control of the company and breaking relations with brittish-owned EMI. From 1936 to 1945, the company was run by a nazi appointed man known as Johannes Kepler, operating the Odeon label idependently from the brittish parent company. Lindstorm's infrastructure and factories were destroyed by 1945 and the company hitherto dissappeared.

__revise__ And we put out records, too! by hmvh
German Pressing Plants by manus-von-alles
View More Lists →