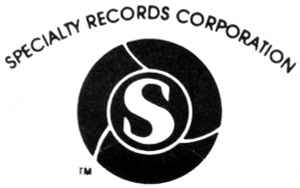 Profile:
Defunct US manufacturer and pressing plant which was located in Olyphant, PA.
(Not a record label: use only as Manufactured By / Pressed By / Duplicated By / Glass Mastered At)

HISTORY
Founded in 1946, Specialty Records Corporation was at one point one of the biggest pressing plants in the world. Warner Communications Inc. purchased Specialty in 1978 along with Allied Record Company in 1979 to form WEA Manufacturing Inc. CD pressing started at the plant in September 1986 (first disc: Phil Collins - No Jacket Required). They also manufactured 8-tracks, cassettes, VHS tapes, and DVDs. Specialty pressed records for a huge range of major and minor record labels, including Asylum Records and Island Records, as well as for record pressing brokers. WEA operated the pressing plant under the Specialty name until the plant was officially renamed WEA Mfg. Olyphant at the end of 1996. In 2002, the vinyl pressing assets were sold to Music Connection, Inc. and moved to Pennsylvania to form 33 ⅓ RPM; in 2003, the facility was sold to Cinram as part of their takeover of WEA Manufacturing. Cinram operated the plant until November 2015, when Cinram's North American operations were acquired by Technicolor. Technicolor closed the plant on May 1, 2018.

VINYL
• Pressing plant code 49 on labels, as seen on releases from PolyGram's sublabels and partner labels.
• Often denoted by an "(SP)" or "SP" plant code printed on center labels on many of the labels they pressed record for. Often denoted on Atlantic releases or related labels' releases with a "-SP" at the end of the printed matrix number on the center labels.
• Usually on vinyl from late '70s to '00s by the machine-stamped SRC logo in the runout groove dead-wax, although earlier releases will sometimes only have an "-SP" or "-SR" etching, without the logo.
• An "E A S T" embossed around the center hole (sourced from metal parts that were originally made for use at Allied Record Company based on the etchings). Note that usually the "T" is the most visible, sometimes the only really visible letter. Also note that a lone "A" embossed in the label area would indicate it was pressed at Allied Record Company.

Similar patterns can be found on other releases, which were pressed outside U.S. for foreign markets. Here, e.g. "SPGER", "SP-GER" or "SP W.GER" can be found in the runouts, which means the masters were plated at SRC, mastered by Record Service Alsdorf and pressed in a German pressing plant (which eventually can be identified by their specific pattern in the runouts). For example, a widely used cooperation can be found between SRC, Sterling Sound, and Record Service Alsdorf on numerous releases. Identified country codes are:
SPGER - Germany (or SP-GER / SP W.GER)
SPENG - England
SPAUS - Australia
SPCAN - Canada
SP-ITA - Italy

Metalwork IDs on SRC pressings often take the form #-#, e.g. 0-1, 1-1, 1-2, etc.; when entering these matrix codes, please interpret them as numbers, not letters or bars.

COMPACT DISCS
• The "SRC" in the matrix (1986 to 1996). If there is both ARC and SRC, then the CD was pressed at Allied Record Company but the glass master came from SRC.
• Specialty 'S' logo in the matrix ring. (1993 to 1996 [possibly into 1997]). Note that this only appears in the matrix of CDs glass mastered in that period, after that the plant was officially renamed and only a WEA Mfg logo appears on glass masters made post '96.

Differences in CD matrix styles and attributes are commonly referred to as generations.
• Generation 1. Introduced with opening of CD plant. Matrix is preceded and followed by a square block. SRC and number at end of matrix string is separated by dashmark or space. Text is dot-matrix style. Unused space of mirror band is filled with a continuous block.
• Generation 2. Introduced around mid 1987. Same as Gen. 1, with the addition of a single digit label code preceding the matrix string, 1: Warner Bros.; 2: Elektra; 3: Atlantic. SRC and number at end of matrix string is separated by a wider range of special characters.
• Generation 3. Same as Gen. 2 with the addition of Mother/Stamper ID in M#S# format.
• Generation 4. Introduced around September 1990. Matrix is same as Gen. 3, but the blocks are removed from the remaining space of the mirror band and filled with thick barcode blocks.
• Generation 5. Introduced around mid-1992. Matrix is same as Generation 3 and 4, but the barcode is removed and asterisks fill out the remaining space. The character separating SRC and digit is either ## or **.
• Generation 6. Introduced late 1992 or mid 1993 (currently debated in forum). This generation saw a larger rework: the font-type is traded for courier-type, the Specialty 'S' logo (or also referred to as "swirl" logo) is introduced, the asterisks filling the empty space is abandoned. Barcode is reintroduced, although the blocks are now thinner. Matrix sequence is otherwise same as earlier.
• Generation 7. Same as generation 6, except the Mother/Stamper ID is not monospaced, but proportional.

Notes:
1. Introduction dates may not be exact. Use with caution.
2. Different generations may have overlapped, meaning that one generation might have already been introduced when the earlier generation was still in use.
3. Mould SID codes have been used in final years of SRC, same as the codes known at WEA Mfg. Olyphant.
Parent Label:
WEA Manufacturing Inc.
Contact Info:
1400 E. Lackawanna Ave.
Olyphant, PA. 18447.
U.S.A.

Did Specialty [in the 1990's] get dust in their stampers?
Reply Notify me Helpful